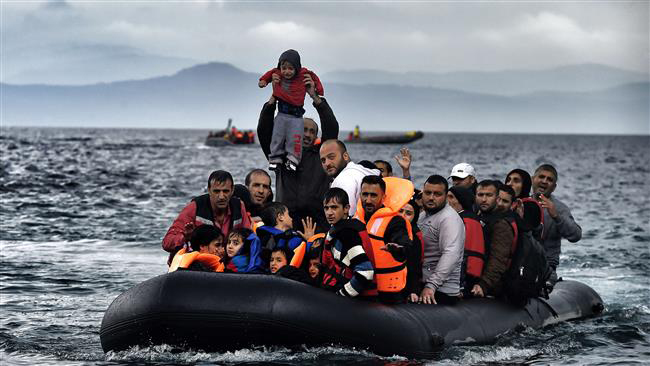 Iranian refugee Mitra Robeer came to Germany with her mother and sister in 1998 and currently works as a translator for refugees—Arabs and Persians in particular.

“My sister and I left Iran thanks to a plan my mother formulated. We were both wanted by the authorities for our political activities. So, our mother helped us escape when we were released [from detention] pending trial. Our father was dead, so we agreed out of fear and because we didn’t want to make our mother feel like she was not in control,” Robeer explained.

Initially, her family had wanted to go to America. However, her mother refused to let them go to America alone.

Her political activity began at university. There was a doctor who used to speak to the students about freedom, and told them that the voice of students and young people drives societies. “He always told us to raise our voice, as we are the party who determines the nation’s path. His words inspired us all and made us dream of a democratic Iran. So, my sister and I became involved in partisan work,” she said.

But one day the professor did not show up. It was rumoured that he was killed in a fight with his wife’s lover. “But we knew this story was a lie,” Robeer said. “His young daughter drew a picture of her father on the ground with a bullet between his eyes. Therefore, we were sure that the government searched his home and he was politically liquidated.”

At that time, the students formed groups to raise the importance of the issue, but Robeer’s group was arrested. They were taken somewhere for investigations, which she described as “overburdening”.

“The room was chilly but when we asked for reprieve from the cold, the investigators turned the air-conditioner down and strange gases and remnants of rodents came out of it. We were sure that we would fall ill and die,” she said.

The authorities put pressure on their families. “After the death of our father, who had worked in the culture ministry, our mother was determined for us to escape Iran as she feared for our lives. Through our father’s connections, she managed to secure our release pending trial,” Robeer said.

Their mother arranged for them to escape with traffickers in a pickup truck, and the sisters hid underneath the cargo. They escaped to Tehran, then to Iraq, then to Turkey, then Greece, and finally to Germany. The women were in their early twenties and were distraught. “People found our sadness strange, but we were sad that we did not have any opportunities. We loved our country, and wanted to change it for the better.”

Furthermore, Robeer was unable to complete her education in Germany since, at that time, refugees had no right to do so until their request for asylum was accepted. Her sister Mihnosh’s documents were accepted more quickly so she returned to university to complete her studies.

“As for me, I learned the language and began to work voluntarily to help people and return the favour granted to me by a country, which even if it does not respect you, it will not violate you; and, in general, is always more fair towards us than our own countries,” Robeer said.

Expanding on Germany’s treatment of refugees, her work with newcomers, and in response to the accusations refugees direct to German employees and translators, and their frequent complaints of bureaucracy, mistreatment, and manipulation of translations, Robeer said: “Based on my experience, those in need have the audacity to complain about things that are not true.”

“When we came here, we did not have the right to free meals and did not receive a monthly cash allowance. We used to take papers and go to the supermarket and stand in a separate queue so as not to delay the other customers, and we were thankful for Germany,” Robeer explained. “But now, every refugee has a roof over their heads and a cash allowance. Moreover, we used to study the language at our own expenses, but now refugees have the right to take a language course from day one—paid for by the taxpayer. However, most of them find some kind of pretext to attend, which wastes the taxpayers’ money.”

She added that the governmental offices try to help them and work to find solutions for any problem facing refugees; however, they are depressed and complain. “Personally, based on my information and experiences, I see the major problem here is that these refugees pay huge amounts of money to reach Germany, so they believe that upon arrival they will find an open paradise—their expectations are incredibly high,” Robeer elaborated. “They are shocked that everybody here receives help within the basic limits, not luxuries. Thus, they think that what is separating them from their dreams and visions is racism, but this is untrue most of the time.”

Robeer then asked: if everybody is “cursing and spitting on Germany” and criticising all the procedures, the question is, why do enormous numbers come to seek refuge in Germany? “Recently, it’s Syrians in particular, but before them it was Chechens, Afghans, Iranians, and Somalis.”

“In their journey to escape, they passed by several other countries in order to arrive in Germany. So, why did not they stay in one of those nations if they offer better or even similar forms of aid? The answer is clear for anybody who knows immigration laws: Germany is the best,” Robeer stated.

She cited the many benefits that refugees can receive in Germany: monthly aid, health and social insurance which unemployed Germans may not receive, and for the first time the German government will accept refugees’ certificates of education, such as a high school certificate. “That did not happen in our day and has not happened in other countries. I am glad for them, but sad for our generation. As a matter of fact, I believe that whatever efforts we make to satisfy them, the majority will never feel happy. They want to live like the rich Germans do—they are already equal to ordinary Germans, but this is not enough for most of them,” Robeer said.

Robeer denies that there are parallel societies among Iranians in Germany, saying: “I am completely integrated, as well as my family. Many of those who came from Iran are religious extremists, but there is no Iranian or Persian parallel society in Germany.”

The translator says that the biggest obstacle for refugees now is learning the German way of life.

Refugees believe with time that they have the right to be demanding and disgruntled, especially as the smugglers and traffickers say to them “how lucky you are” to be able to come to Germany. Moreover, lawyers and volunteers at ecclesiastical authorities [the operational and governance structure of a church] teach them how to complain and claim more benefits.