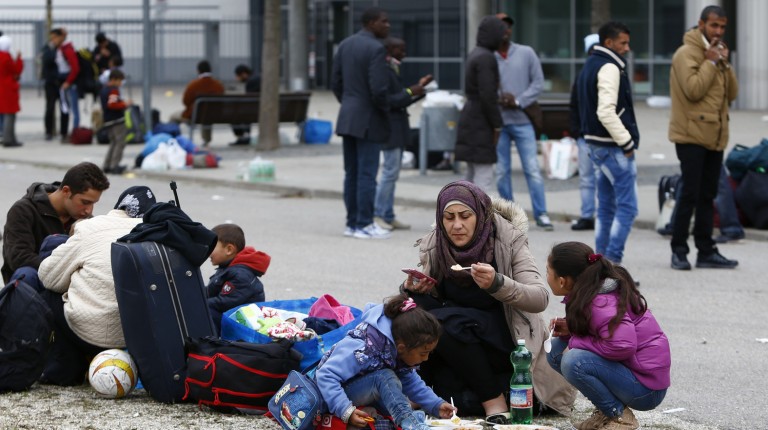 Like many other young people Ahmed—who refused to publish his full name—dreamed of living in the west, and to become a businessman in countries distinguished by prosperity and job opportunities, instead of being a carpenter. This is what he thought before he started his journey to Germany a year and a half ago.

Ahmed, a 27-year-old Egyptian and the second son in a family of five children, originally comes from Mansoura. Ahmed’s father is a farmer who rents land, which has created a series of difficulties in their lives. They borrow money to be able to sell crops, and borrow again to be able to live.

Ahmed left his country after it stood in the way of his opportunities, despite him having received a high school diploma. After he graduated, he decided to continue working as a carpenter—the profession he was taught since he was a kid. He used to earn EGP 8 a day; however, that was not enough to live on or start a family with, which led him to flee the country and travel to Turkey, where he worked in garment factories. He said that his family gave him permission to travel to Turkey.

Ahmed chose Turkey as a destination because its visa is the cheapest. “The visa’s cost was roughly EGP 450, and the cost of living there is relatively inexpensive. The total cost of living and transportation is roughly EGP 3,000, if you are unemployed. The first thing you should do in Turkey is to ask about the places where Arabs gather, and then you should meet them in order to make a living. Some of them will help you find work and get paid—this is what actually happened to me—and I worked in a garment factory. I managed to save a sum of money and send it to my family in Egypt,” Ahmed said.

Ahmed spent two years in Turkey, making more money than he did in Egypt with a weekly income of 500 lira, which is equivalent to $200. He stayed in Turkey until “its currency became worthless”. That was when he and his friends decided to leave for Europe with the immigration waves of Syrian and Iraqi refugees.

Ahmed added that they were five young people who took the decision to immigrate together and shared one apartment. Preparing for the immigration journey was not difficult, since Turkey lacks supervision, and everything there can be done through paying bribes. Ahmed added that you can work without providing your passport. “If you know one of the mediators, it won’t be difficult to immigrate,” Ahmed said.

The illegal immigration itinerary was given to Ahmed as follows: “You go to Izmir to take the rubber boat to the nearest Greek island. Then you introduce yourself to the police and give them your identification papers, and the decision to leave the country within a week. After that you determine your destination and travel to the country you choose.” He added that the only risks are the rubber boat trip and the hit-and-run chase with the Greek maritime authorities before reaching the Greek shore. Everything after that becomes easier and simpler.

Ahmed said that he chose Germany as the final destination for his immigration journey because its procedures are simpler and its bureaucracy allows him to live there as long as possible, because Egypt is classified as a safe state.

Therefore, he applied for humanitarian asylum—the approval or rejection of these applications takes a long time because each request is examined separately, the waiting list is long, and it is not a priority for the German government.

“The German government rejects most of these requests. Therefore, I worked hard to find a job to earn money without paying taxes, and live in Germany. When the government issues its decision, I will find another way to stay; for example, presenting a plea will put me back on the waiting list, which means I might be able to stay for more than five years,” Ahmed explained.

Regarding the living conditions, he said that working without a passport is called “informal business”, which is prohibited and criminalised by the state. “As a refugee, I can only work under conditions, such as learning the German language to integrate, which is difficult for someone like me,” he said. Ahmed is working hard to take advantage of his time in Germany by increasing his savings, which reached EGP 80,000 from his work in Turkey and Germany so far.

Ahmed added that the government sent him to a school to learn the German language, but he left it after three months. He worked in a restaurant and did not pay taxes and violated the German law.

“At the beginning, the employers do not know you but know you need a job, so they use you and pay you a salary that is lower than what you deserve. So we agreed on €2 per hour. The normal rate is €5 to €7 in the eastern region and €6 to €8 in the western region. I worked eight hours a day, and after the employer recognised my skills, he raised my salary to €5 per hour like the rest of the staff—60% of the staff is like me and works informally,” Ahmed said.

He spends an average of €10 a day, and lives in a shared small house, paying €150 of the rent a month. Ahmed earns roughly €30 a day, and the government provides him with €140 a month. “I sometimes work overtime after and save more than €1,000—an amount I would have never been able to earn in Egypt or Turkey,” he said.

Ahmed’s dream is simple. He wants to obtain a residency permit and the right of asylum, and own a restaurant. He stressed that he is capable of achieving his dream if he stayed in Germany. He said that he will work to establish a restaurant using other sources of funding, because restaurants are profitable, since “Germans do not stop eating”.

If he is not provided with a residency permit, he will leave his house so that the authorities don’t find him. By then they will look for him again and queue him on the waiting lists. He said that during that time, he will search for a legal way to stay in Germany or repeat the experience in one of the other European Union (EU) countries. He added that he will not go back to his country before five years pass, because “Europe is the best in the world”.

Ahmed said that sometimes he feels nostalgic and thinks about returning to Egypt; however, the stories he listens to from his friends about being fired from their jobs keep these thoughts away.

In terms of his savings, he said that he transfers them through people who are legally residing in Germany.

Ahmed said that he did not follow the easy way and get married to one of the German women, because he considers it disgusting. He doesn’t want to have a son from a German woman, because in case of any dispute, she will have custody rights.

He concluded: “The unemployment problem in Egypt is because young Egyptian people like to take money from their families instead of working, and they don’t realise how their families feel when they see their children sitting next to them after all these years of education.”