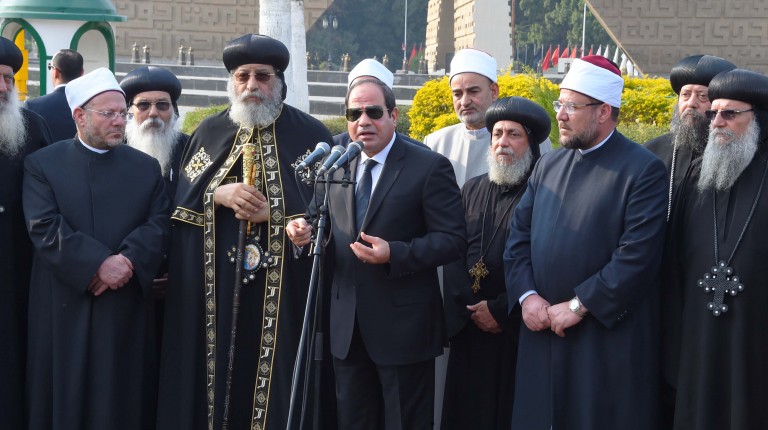 “The man who entered the church and blew himself up is named Mahmoud Shafiq Mohamed Mostafa. His body was found on site. He used an explosive belt,” Al-Sisi said during a funeral organised by the state for the attack’s 25 victims at the Unknown Soldier Monument.

He added that three men and a woman were arrested in connection with the attack, while two suspects are being searched for.

The president dismissed claims that security forces and officials should also be held accountable for the attack, arguing that much of the successful efforts in combating terrorism are not announced to the public, especially in North Sinai.

According to a presidential statement, the aforementioned meeting included the presence of the heads of Military Intelligence and the National Security apparatus. During the meeting, Al-Sisi received a report on the circumstances of the attack and the results and evidence from preliminary investigations, in addition to efforts exerted by security apparatuses to arrest the perpetrators.

Al-Sisi said efforts must be doubled to quickly arrest the perpetrators and put them to trial, saying the state is determined to have revenge on the perpetrators, the presidency’s statement read.

The president also discussed security conditions across Egypt and efforts exerted by security and army forces to counter terrorism, stressing that security apparatuses should be alert and ready to face any threats.

On Sunday morning, 25 people died and 49 others were injured in an explosion that rocked Cairo’s St. Peter and St. Paul Church located in Abbasiya.

Meanwhile, hundreds of protestors staged demonstrations on Monday outside the St. Mary and St. Athanasius Coptic Orthodox church in Cairo’s neighbourhood of Nasr City, in opposition to being denied entry to the funeral for the victims.

Only the victims’ families who received official permissions were allowed to attend the funeral. The funeral was attended by the president and Pope Tawadros II, along with a number of public figures.