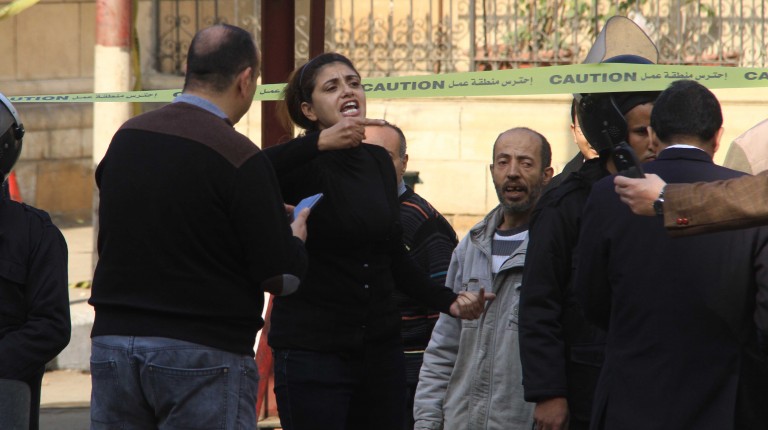 Sunday’s deadly bombing of a church in Egypt’s main Coptic cathedral in the capital stirred condemnation from local political and social factions, as well as international solidarity. The explosion killed 25 people and injured 49 others; reportedly most of the victims were women and children.

A delegation from the Free Egyptians party (FEP) visited the cathedral and organised for blood donations at El-Demerdash hospital to help the injured, according to the party’s statement.

Meanwhile, the event sparked protests that continued on Monday by angry citizens who chanted against the Ministry of Interior. Several organisations that spoke up largely blame the attack on security failures.

Al-Karama party and the Socialist Popular Alliance party (SPAP) issued a joint statement Sunday describing the attack as a terrorist act and rejecting the use of violence.

Moreover, the SPAP said it will host a conference in solidarity with the victims on Tuesday with the participation of human rights defenders, political, and syndicate figures.

The parties argued that there has been general security negligence when it comes to combating terrorism.

“This is because the Ministry of Interior is giving more importance to political security than criminal security,” the parties said, demanding accountability for officials responsible for such security failures, adding that “tyranny and terrorism are two sides of the same coin”.

“We don’t only demand the perpetrators’ arrest, but accountability for all those holding terrorist ideologies, mostly represented by the Salafists whom the state is reluctant to face,” Gabriel told Daily News Egypt Monday.

According to Gabriel, the timing of the attack shows that Copts are targeted by extremists, comparing it to the bombing of Alexandria’s Saints Church (Al-Qeddesine) on New Year’s Eve 2011.

On a further note, the Egyptian Commission for Rights and Freedoms (ECRF) said in a Sunday statement that security for churches and houses of worship should be improved, especially during holy occasions.

ECRF also spoke of security deficiencies which allowed explosives inside the church, and more generally, the ineffectiveness of the security state alone in facing terrorism as an ideology. “This requires comprehensive efforts and cooperation between religious institutions, civil society and the media,” the ECRF said.

“We also assert the necessity of independent and transparent investigations to reach full accountability for those responsible and grant them a fair trial in the fastest possible period,” the commission added.

The non-governmental organisation (NGO) mentioned the Alexandria church bombings saying: “Authorities failed to bring the real perpetrators to justice, which has also been happening with sectarian attacks on Copts.”

The state rejected arguments of security failures. For his part, President Abdel Fattah Al-Sisi said in a Monday speech that he refuses such claims, and that security forces have made large achievements in combating terrorism, especially in North Sinai. The cabinet also denied talks about the resignation of Interior Minister Magdy Abdel Ghaffar.

The UK, US, Jordan, and Lebanon, among others, expressed solidarity with the Egyptian government and people. According to a statement by the Egyptian Foreign Affairs Ministry, British foreign secretary Boris Johnson said: “The international community should step up its efforts to combat this phenomenon in all its forms and cut off the sources of its funding and support.”

A statement by the European Union also condemned the blast, saying “it is not the first terrorist attack in recent days, following two other bombings in different parts of the country,” and expressing support to Egypt.

Moreover, Human Rights Watch (HRW) called on Egyptian authorities to bring the perpetrators to justice, in a Monday statement, noting the explosion was the deadliest since the Alexandria attack.

“The egregious attack on the Coptic cathedral should be recognised as an attack on all Egyptians,” said Sarah Leah Whitson, Middle East and North Africa director at HRW.

“Egypt’s government needs to ensure immediate protection for the Coptic community, especially during the upcoming Christmas holiday. The victims deserve a credible, transparent investigation that brings the perpetrators to justice and is crucial for ending such attacks,” she added.

As for the Egypt Writers Union’s opinion, its press statement shed light on the failure of proper cultural and educational shaping of people’s minds. “Terrorism is nothing but the result of the failure of many cultural institutions in raising awareness.”