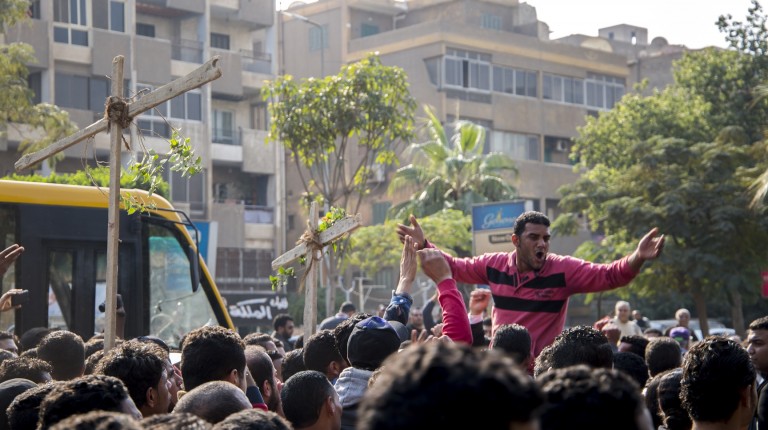 In Beheira, Aswan, Suez, Cairo, Giza, and Fayoum, the heads of the security directorate visited several churches in the cities and demanded troops guarding the areas to stay alert and widen the circle of suspension which allows police personnel to stop any suspects on sight.

Meanwhile in Daqahleya and Menoufiya, governors in the cities ordered security officials to install security camera at all vital facilities, including all government buildings.

After the deadly explosions, the public opinion targeted the police, blaming it for the lack of security which allowed the perpetrators to achieve their objective.

A video was published on social media and talk show programmes showing several individuals passing and entering the building of the St. Peter and St. Paul Church. It also shows the impact of the explosion. Several media outlets declared certain individuals from the video as the perpetrators; however, these views have not been confirmed by the police.

Around churches, police are present in the form a security forces usually comprising four to six conscripts and one or two non-commissioned officers. Meanwhile, the church’s own security is charged with securing the entrance and checking guests’ bags. They are usually hired from each church.

In the past years, Egyptian churches have come under attack on numerous occasions, including the bombing of a church in Alexandria on New Year’s Eve in 2011, as well as the torching of a church in Cairo in August 2013 in the violence following the dispersal of the Rabaa Al-Adaweya sit-in.