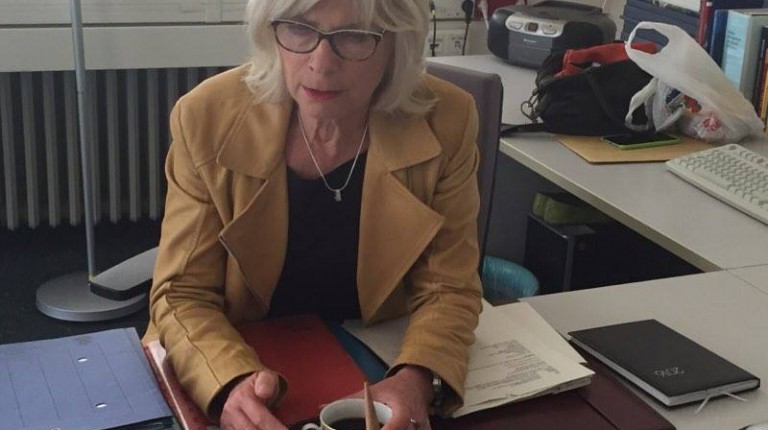 Refugees in Europe have more to worry about than the smugglers. Police are chasing them across Europe, but there are those who are trying to help refugees integrate into society, and to legalise their status. Elona Müller-Preinesberger, executive commissioner for social affairs, youth, health and order in the German city of Potsdam is one such person.

“There are refugees standing by the German borders suffering and wanting to live in a place that preserves their humanity, especially children,” Müller said. “In Potsdam we are working on refugee integration. The situation is quieter now, but we still have a lot of challenges to work on.”

“Now we are working on integrating children into education, and we encourage young people to complete their education,”  Müller added. “We have many obstacles facing the labour market and we are still learning how to deal with the situation and get better. In 1993 laws were passed that aimed to create an unappealing atmosphere for immigrants, and particularly refugees. However, now we are talking about integrating them and granting them the same rights as our citizens. We have a large number of asylum requests, and each request carries its own story and reason.”

Müller explained that refugees have the right to social and economic aid, which varies according to their legal status. Due to a lack of staff however, Müller says there are pending applications dating back 12 months.

Müller continued by saying that asylum applicants obtain €370 a month, and they are not charged for basic amenities such as gas, water, and electricity. Once their applications are processed and they are granted asylum, the government provides them with financial assistance similar to the unemployment benefits allotted to German citizens, until they find a job. The state offers training programmes to help refugees find work.

Müller added that those who complain about their living standards had high expectations prior to coming to Germany. “The situation for every refugee is different, and the state ensures that they receive enough support to live in dignity but not in luxury,” she said. “Even if the government accepted giving more, the taxpayers should not have to endure that. How could the state convince taxpayers, who work hard and do not live in luxury, to prop up a life of luxury for refugees! How could a refugee find the motivation to work and achieve success if he already lives in luxury!”

Müller explained that refugees also have access to basic healthcare, which is considered a basic human right in Germany. She said that the process of attaining basic healthcare has improved, adding that employers originally had to refer people to a doctor, but now that process is in the hands of doctors and the patients themselves. The old system, she argues, was unfair and a heavy burden on job seekers.

“Now, even the newborn refugee children have the right to be treated at a hospital,” Müller explained. “Refugees also receive free education and language courses to enable them to integrate easily and effectively in German society. There are six schools specialised in teaching the German language, and some simple study materials. Those schools prepare the children to enter regular classes in German schools located in their areas.

In regards to the work done by volunteers and other concerned Germans, Müller said she was proud of the work they do. She admitted that there have been acts of violence directed at refugees, but noted that the government is doing its best to encourage people to tolerate refugees and stop the violence. “Germans may envy refugees because they do not pay taxes,” she said. “Some citizens have called on the state to stop using clubs and gyms as asylum shelters out of a fear that their sporting activities would be affected.” Müller also believes that the influx of refugees will not result in mass poverty, because refugees would contribute to the development of German society.

The social, financial impacts of economic reforms: where do poorer classes stand?