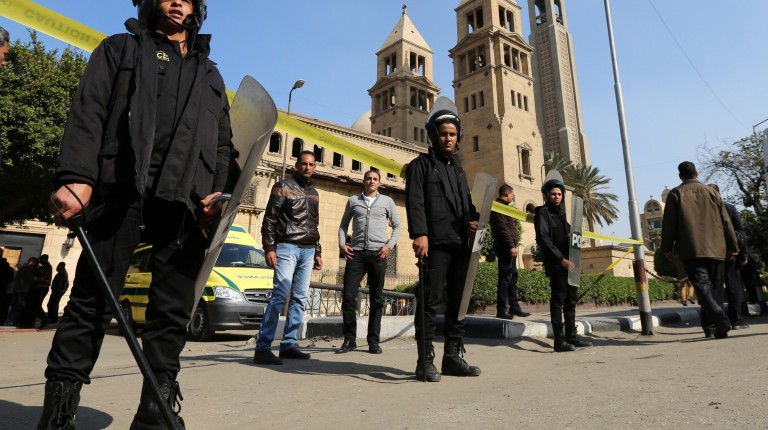 It was with heavy hearts that Egyptians Copts and Muslims followed up on the devastating attack St. Peter and St. Paul Church in Saint Mark’s Coptic Orthodox Cathedral in Abbasiya on Sunday—the same day that Muslims celebrate the Prophet Mohammad’s birth [Al-Mawlid Al-Nabi].

This past week has seen a string of attacks in the capital. On Friday, an attack on two security roadblocks in Al-Haram Street in Giza claimed the lives of six security personnel and injured three others, according to the Ministry of Health. Another bomb reportedly targeted a police vehicle in Kafr Al-Sheikh governorate; one civilian was killed and three security personnel were injured.

Economic experts expect these attacks to negatively affect the economy, especially specific sectors like investment, tourism, and the exchange rate.

Professor of economics at Cairo University, Aliaa El-Mahdi, said current events may affect Egypt’s credit rating. Rating institutions have categorised Egypt at “B” for more than two years, indicating that the country is stable. However, the recent strings of bombings could see these institutions downgrade Egypt’s rating to B- according to political instability and security concerns.

El-Mahdi explained that the civilian casualties from Sunday’s attack put Egypt at further risk, compared to if Friday’s attacks had been the sole incidents—especially as Christians, a minority who are already persecuted in Egypt and across the region, were the target.

El-Mahdi said recent events may affect potential investors who may choose to postpone their business plans and await the outcome of these attacks and for the greater stability.

Meanwhile, those already investing in the country may decide to suspend expansion in the market and depend more on exchange rate policies, taxes, and other economic elements.

Pumping capital or investments requires a secure community and a stable market to guarantee a profit; therefore, investors are afraid to risk their money in an unstable country, according to economic expert Ahmed Zikrallah.

Zikrallah expects the attacks will lead foreign investments to “escape”. Investors will not accept investing in a country on the brink of failure with explosions in the heart of its capital—even inside heavily fortified places.

The Executive Board of the International Monetary Fund (IMF) had predicted that the Egyptian government would attract $9.4bn in foreign direct investment by the end of the current fiscal year, compared to $6.7bn in the last fiscal year. Analysts stressed that this could be difficult under these exceptional circumstances.

Chairperson of the Egyptian Junior Business Association Ahmed Mashhour said any investment needs stability, whether in security, legislations or business factors, and the investment climate must be a catalyst for the investor to launch new businesses in the country.

Economic expert Khaled El-Shafaei said these acts of terrorism target the tourism sector, especially as the resumption of direct flights between Egypt and Russia are just around the corner, as well as a number of European countries.

Despite the long negotiations between the two sides and the improved security measures in Egypt’s airports, El-Shafaei thinks it’s likely that recent events could affect the return of flights between Egypt and Russia.

El-Shafaei pointed out that investments, which began to enter the market after the Egyptian pound was floated, reached $1bn, explaining that terrorist operations aim to prevent investment inflows to Egypt.

El-Mahdi disagrees with El-Shafaei, saying that stakeholders in the tourism sector are negligent.

El-Mahdi explained that after the terrorist attack in Luxor in 1997 when 58 tourists were killed, former minister of tourism Mamdouh El-Beltagi developed the sector and made a boom in just six months.

Mashhour noted that these events arouse foreign concerns about coming to Egypt; therefore, the US dollar flow decreases, which in turn affects economic stability.

“Terrorism affects all sectors and situations inside any country, not only in Egypt, but transparency is required in such a situation to express what is going on and should be expressed through the media to the world,” Mashhour said. “Tourism has been hit and therefore the dollar price will increase due to high demand and lower supply because the main foreign currency sources [tourism] are fading.”

The head of Egypt’s Coalition to Support Tourism, Ehab Mousa, said the bombing will have a significant impact on tourism during the winter season.

Mousa expects a dramatic decline in the number of tourists coming to Egypt over the Christmas and new year holidays.

Mousa noted that Christmas is one of the important seasons for tourism in Egypt but unfortunately, the terrorists have succeeded in striking a blow to the sector due to their choice of time and place.

He expressed his concern regarding the appreciation of the dollar exchange rate in the case that the tourism industry is hit by a recession following the attacks.

Further, Heidi Hemaya, the media planning manager at J. Walter Thompson (JWT) Cairo which is responsible for the promotion of Egyptian tourism, said the company halted its advertising campaign that has been planned for launch on Sunday on CNN.

Hemaya told Al-Borsa newspaper it was decided that the campaign would be halted for 48 hours after the bombing of the cathedral.

Hemaya said the company has started to communicate with overseas offices to see how the cathedral bombing echoes abroad and find ways to handle the repercussions.

The US dollar broke through EGP 18 for buying at the Central Bank of Egypt (CBE) on Monday, for the first time since the flotation on 3 November.

The highest buying offer at banks on Monday was recorded by Abu Dhabi Islamic Bank at EGP 18.16 to buy and EGP 18.45 to sell.

Meanwhile, analysts ruled out that the exchange rate would be impacted by the recent terrorist events in Egypt.

Head of the treasury at a foreign bank operating in the Egyptian market, Tamer Youssef, said the impact of terrorism is likely to unfold on the tourism sector, and thus foreign exchange revenues. “However, tourism is already struggling and banks do not rely on the sector for hard cash,” he added. “The exchange rate has not and will not be impacted by these events.”

He noted that the available hard cash has been increasing at banks as the price hits EGP 18.

El-Mahdi said the St. Peter and St. Paul Church bombing cannot be linked to the exchange rate or the Egyptian Exchange (EGX).

On Monday, the first day of trading on the EGX after the cathedral bombing, saw a drop in the morning to 11,224 points during the first half hour of trading; however, it closed with gains despite the expected downturn on the back of the attack.

Mohamed Deshnawy, CEO of Roots Securities Company, said the EGX absorbed the negative impact of the terrorist operations within an hour at the beginning of the session by the market switching from the red to the green zone and remaining there until the end of the session.

This marked the end of the instant negative impact.  However, the real impact of that operation on investment, whether direct or indirect investment, will be manifested in concerns about terrorism. Although, he added, the quick arrest of the offender should, to a large extent, decrease that negative impact. Moreover, that impact will decline gradually as time passes with no further terrorist attacks.

Deshnawy expected the EGX’s performance to be normal in the next period.

Adel Abdel Fattah, managing director of Themar Securities Brokerage, said the EGX’s performance came contrary to expectations that it would be negatively affected by the terrorist attack on the cathedral, as a result of the selective purchases targeting stocks that have not yet benefitted from the pound’s flotation.

He said the EGX benefited from the timing of the return of Arab investors’ purchases, as they started to purchase again in the middle of last week and continued in the Monday session this week, following a period of continuous selling since the pound was floated. These purchases have helped the EGX to overcome the repercussions of the church bombing.

Abdel Fattah expects the EGX’s performance in the coming days to be separate from the repercussions of the terrorist operation, as it saw many disturbances in the previous period, which gave it a higher ability to absorb such incidents without panic.

Ahmed Abu Hussein, managing director of the brokerage sector in Cairo Financial Holding, says the EGX’s performance surpassed even the most optimistic scenarios. These only expected the market to remain stable without retreat, not to make an increase, as happened in the Monday session.

Abu Hussein expects the EGX’s positive performance to continue, despite the successive terrorist operations in Cairo recently, thanks to the foreign and Arab institutions’ trust in the attractiveness of the EGX’s investment opportunities.

Abu Hussein mentioned that floating the pound and enabling foreigners to transfer their profits flexibly have contributed to the creation of foreigners’ trust in the Egyptian market, especially as this trust comes after five years during which the foreign institutions lost their interest in EGX.

The business community must support the country in these circumstances

Abu Bakr El-Deeb, a writer and expert in economic affairs, said the role of the business community in supporting Egypt’s economy is limited and very weak; despite possessing vast fortunes, they seem satisfied only with appearing in the media on talk show programmes.

El-Deeb said the business community must be charitable as business inside the country promotes the economy. The richest Egyptian businesspeople in 2014 have billions of US dollars in combined wealth.