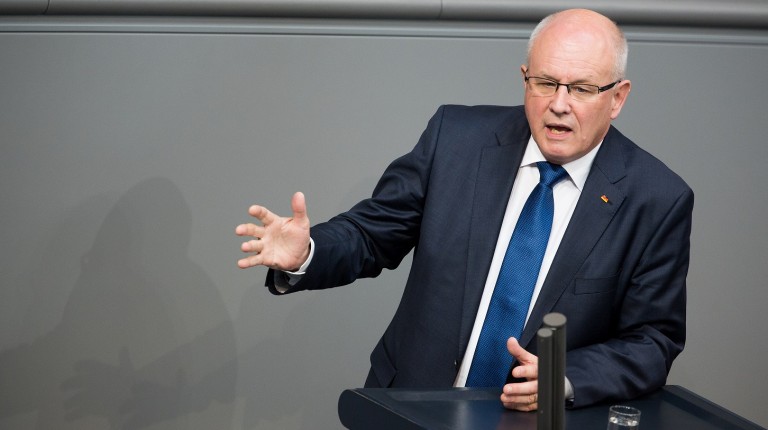 According to a presidential statement, Kauder paid his condolences and expressed German chancellor Angela Merkel’s deep condolences to Al-Sisi for the families of the St. Peter and St. Paul Church attack victims. The attack last week left at least 26 dead and 49 others injured. Kauder praised how Egyptian authorities tackled the consequences of the attack and their immediate identification of the defendants.

Kauder further added that bilateral relations between Egypt and Germany have significantly thrived over the past few years, further praising the necessary economic reform steps that Egypt has recently undertaken.

Al-Sisi said during the meeting that the terrorist attack on the church reflects the importance of joint international cooperation to combat terrorism. He added that Egypt has special relations with Germany, particularly on the economic level.

The president also stressed the importance of adopting an inclusive strategy to tackle illegal immigration and means to combat and limit it.

In a statement issued by the Foreign Affairs Ministry on Saturday, official spokesperson Ahmed Abou Zaid said that Shoukry discussed the economic measures that have been undertaken by the Egyptian government over the past few months, adding that Egypt is looking forward to Germany’s support in implementing Egypt’s ambitious development programme.

Abou Zaid added that Kauder was keen on knowing Egypt’s vision regarding several regional topics, particularly the situation in Syria. Shoukry said that Egypt is adhering to its stance concerning its insistence that humanitarian aid be delivered all across Syria to civilians. He also highlighted the importance of reaching an inclusive, final settlement to the turmoil.

The duo also touched upon the Libyan situation and Egypt’s support to the Skhirat agreement that is backed by the United Nations, Shoukry also said there is significant progress in combating Islamic State in Iraq. Kauder praised Egypt’s stances on different situations in the region and said that Germany supports Egypt’s economic development programme, which it is currently adopting.

Two days following the attack on St. Peter and St. Paul Church, Al-Sisi received a phone call from Merkel in which she expressed Germany’s deep condolences for the families of the victims.

Merkel said that Germany is standing by Egypt in the latter’s war on terrorism. They also discussed bilateral relations and means of enhancing them.

According to a statement issued by the army’s official spokesperson Mohamed Samir last week, Egypt received a submarine from Germany in a ceremony that took place in the city of Kiel.