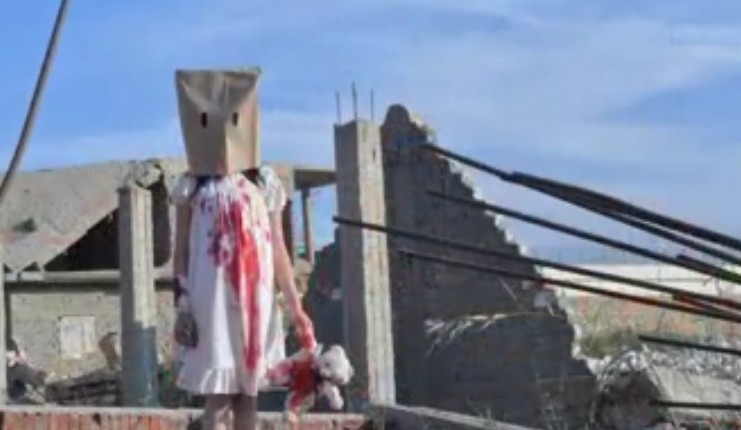 The Ministry of Interior issued a statement accompanied with a video and photos on Monday evening through which the ministry said that it arrested a man who has been staging photographs of a girl meant to look like a victim of the Syrian civil war.

The photographs were allegedly taken near the Suez Canal. In a video of the incident shared by the ministry, a person claiming to be a police officer arrests four adults and two children; an eight-year-old boy and a 12-year-old girl, who said they were staging the photographs in a campaign to support the people of Aleppo. The video also showed the girl wearing what seemed to look like bloodstained clothes.

The photos reportedly show the girl standing amidst the rubble of a condemned building. The ministry accused the photographer of staging the photographs with the intention of spreading it across social media.

The ministry’s video also shows the girl and her mother, who said that they were invited to a photo session by the photographer through Facebook.

“My daughter told me that she was going to participate in a photo session held in support of the children of Aleppo,” the mother said in the video.

The alleged photographer was also questioned in the video. Identified as Mostafa, the photographer reiterated his intention to carry out a social media campaign in support of the children of Aleppo.

“My name is Mostafa and I am a photographer specialised in capturing photos for ceremonies,” he said in the video. “I wanted to show support for the children of Aleppo that have been affected by the war in Syria.”

The Ministry of Interior also published a written statement which seems to contradict the account given in the video. The ministry accused the photographer of staging the photographs in a deliberate attempt to pass them off as legitimate photos from Aleppo. The statement also said the man has been detained and referred to the prosecution. He has been placed in preliminary detention for four days, while the others were released on bail and the girl returned to her mother.

Explosions heard in Aleppo while thousands wait for evacuation