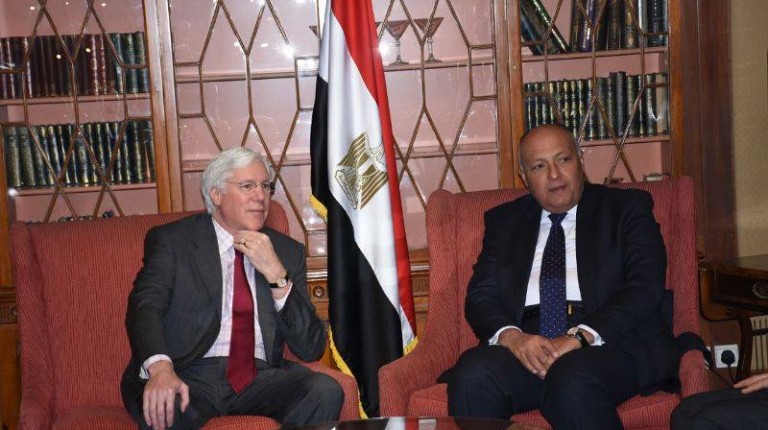 President Abdel Fattah Al-Sisi and Foreign Affairs Minister Sameh Shoukry stressed on Monday Egypt’s eagerness to enhance bilateral relations with the United States (US) during a meeting with a delegation from the American Jewish Committee, according to a presidential statement.

Al-Sisi said during the meeting that Egypt is always in contact with different parties in the US in order to clarify the situation in the region. The president discussed terrorism and its implications not only on Egypt and the Middle East, but on the entire international community.

Having been the focal point of several terrorist attacks, Al-Sisi said that Egypt’s war on terrorism is ongoing until it destroys its roots. He further added that US efforts in the region should continue, particularly in triggering talks in the Palestinian-Israeli conflict. There should be a fair and permanent solution to the Palestinian people, Al-Sisi said.

He stressed that a solution to the Palestinian-Israeli conflict will change the current state of the Middle East, as it will give hope of stability and the possibility of achieving peace. Similarly, the American Jewish Committee praised Egypt’s attempts in trying to bring Palestine and Israel back to the negotiations table.

Prime Minister Sherif Ismail also met with the head of the committee John Shapiro and other members from the committee. They discussed means of enhancing bilateral relations. The committee stressed on the strong bilateral ties between the two countries and US support for Egypt’s economic reform programme.

Shoukry holds talks with US senators, House of Representatives members