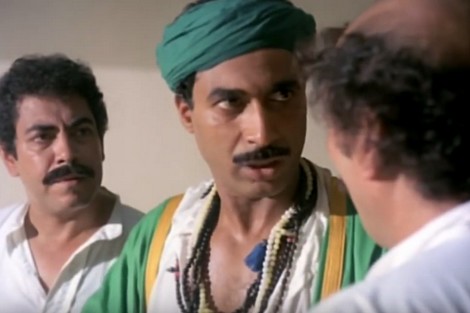 Al-Beida Wal-Hagar (Charlatan, 1990) is one of Egypt’s most famous cinematic pieces, directed by Ali Abdel Khaleq and written by Mahmoud Abou Zaid. The film’s story and script are narrated in a very simple language to tackle very complicated issues such as getting dragged into the free market system, corruption, neo-liberal politics, and religious heritage.

The protagonist here is Mostataa (Ahmed Zaki in one of his most brilliant roles), a teacher and philosophy PhD student. He defines himself as a “man of principle”. He fights price hikes with lowering his consumption—so he tells his students and colleagues. He rents a room previously occupied by a veteran sorcerer, only to be met with tales that the place is haunted. He is also met by former customers who come to him as the sorcerer.

At first, he starts by practising trickery and simple psychology to cure a man who is not sexually attracted to his wife. In this scene, I was reminded of Kamal Attia’s Kandil Om Hashem (Om Hashem’s Lantern, 1968), where a doctor mixes some inherited myths with medicine to create the same effect on his patients, but the difference is obvious between the two films. In Kandil Om Hashem, the doctor reaches a win-win situation but in Al-Beida Wal-Hagar, Abou Zaid follows the old quote that says: “What is built on falsehood is false itself.” We see Mostataa getting himself into trouble through his own deeds.

He goes through a massive transformation from a man who preaches austerity to one driven by materialism. He is later faced with the truth of his origin, as his former neighbour convinces him that “truth is the most important thing in life”. And then he tries to face society with the truth of him being a swindler, but nobody believes him.

When he gets into trouble with the authorities, he tries to get this weight off his shoulders, but nobody believes him. He confesses to the officer that he is a charlatan who masters playing with horoscopes, tricks, and psychology to convince people that he can solve problems, even educated people, like doctors, officers, and celebrities.

The film also carries a political agenda that criticises the free market morals, which arguably turn people into not only animals, but fearful animals.

The late script writer who passed away last week, included a moral stance in his work, whether we like it or not. He was concerned with turning complex ideas into simple dialogues for his characters. His collaboration with director and friend Ali Abdel Khaleq created the “Morality Quadrilogy”, as I prefer to call it: El-Aar (Shame, 1982), El-Keif (The High, 1985), Gary El-Wohoosh (Monsters Run, 1987), and Al-Beida Wal-Hagar. The last one was his peak of scriptwriting—a well-tailored script with a very simple story that holds a lot of hidden metaphors and meanings. This is a must-watch for every fan of cinema and philosophy.