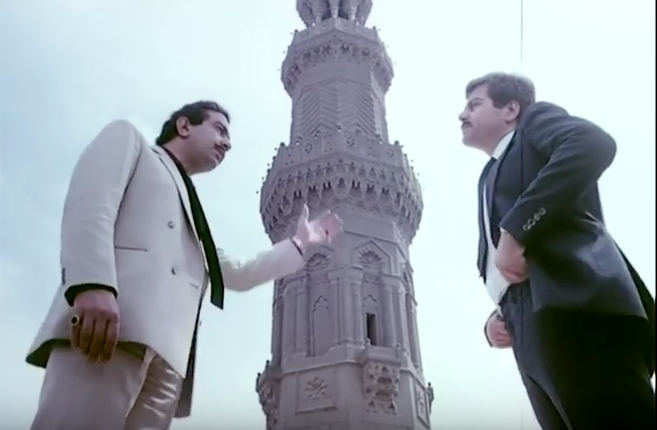 In Ali Abdel Khaleq’s El-Aar (Shame, 1982), El-Hajj Abdel Tawab (Abdel Badie Arabi), a pious spice merchant, dies in a car crash. Following his untimely death, it is revealed that he was a drug dealer; the riches came not from selling hibiscus, but trading hashish. The veil is lifted. His children must now make the choice—either to retrieve their inheritance by continuing with the trade or letting go of it all.

Abdel Tawab had four children: Kamal (Nour El-Sherif), who joined his father in drug dealing; Shoukry, a public prosecutor (Hussein Fahmy); Adel (Mahmoud Abdel Aziz), a physician who treats drug addicts; and the youngest Leila (Ilham Shahine), a university student. The father and Kamal, on the one hand, seem convinced that there is nothing wrong with dealing cannabis, which they see as “natural plants”. Shoukry, on the other hand, is at first opposed to Kamal’s position. At work, he deals with right and wrong. He prosecutes to hail justice and the law. Yet, he twists morals and religious interpretations and, with Adel, reluctantly agrees to work with their drug lord brother. The three take on a journey to extract the merchandise, in order to sell it to another drug lord, with hopes to maintain their social class and hide their current status.

Mahmoud Abou Zaid, who wrote the script, complicates matters even more with the depth of his characters’ conflicts. Now, imagine you have done something you are ashamed of. What do you do? You try to hide it. Abou Zaid’s characters are faced with the shame and preoccupied with trying to hide it. This brings the characters’ contradictions to light. For Kamal and his father, it is one of sin and piety. The father completed six pilgrimages, but right before his death, was making yet another deal. When offered a drink, he does not take it. He is asked: “Drinking is a sin and selling drugs is not?”

The contradiction between piety and sin is also beautifully epitomised in a shot with Shoukry and Kamal. The two stand on the roof of a building, opposite one another, separated by a minaret. This is a low-angle shot, making the minaret’s presence more daunting. Kamal explains to his brother that their father paid their presumed inheritance to “the big guy” and points to the minaret itself. Here, the drug dealer is confounded with the symbol of religiosity, for Kamal believes there is nothing wrong with drug dealing.

So, what happens once the shameful truth has come out? Shoukry is no longer the assertive man when questioning another who is being accused of selling drugs. He finds that he is no different from the accused. He cannot remain a prosecutor and at the same time live off money that has been earned by drug dealing. Yet, he cannot sacrifice the lifestyle he is accustomed to. When we first see Shoukry, it is through his reflection in the car’s mirror, possibly hinting at how he cares about his recognition. Then, he takes part in a discussion about elegance. From there, we know how important his appearance is to him and we understand why he says: “There is no other catastrophe besides that of poverty and the feeling of humiliation and shame in front of people.”

He begins to manufacture a lie to hide the shame. So, he twists the difference between right and wrong, as he interprets “sin” differently. He tells Adel that the money is owed to the both of them because they did not take part in the act of drug dealing itself. The key is to pretend, not know the truth. In order to evade the contradiction, he quits his job, as though to avoid a conflict. Once he leaves his office, he no longer wears suits and ties but changes for leather bomber jackets and a flat cap. To hide the truth, he becomes a different person. But, what truth is he hiding? What is shameful for him? Shoukry is driven by the fear of poverty, while his mother reminds him and the rest: “Shame is in the lack of morality, not the lack of money.”

Their sister Leila, however, cannot go on pretending. She leaves her husband who ignores the real reason behind the break up. When asked why, she responds: “To cover up my father’s shame and wear the garment that suits me.” Abou Zaid has carefully chosen words that highlight the contrast between who the characters thought they were and who they actually are. It is up to each of them to assume the contradiction. Adel for instance, after having found out about his father’s truth, becomes annoyed every time someone calls him “ya duktur” (doctor). But, the dissonance has taken a toll on each of the brothers at the end, a trademark in Abou Zaid’s writing. The once triumphal characters are given choices, only to find themselves in an abyss-like end.

El-Aar is not a tragic story with heroes facing a moral dilemma. The title sequence, with its shots of the empty El-Hussein neighbourhood, already helps us see the end. Rather, through the trope of pretending, metaphorized in the elusive character of drugs and crystallised in the contradictions, we may see a Fyodor Dostoyevsky in Abou Zaid. El-Aar asks about the limits of being human.