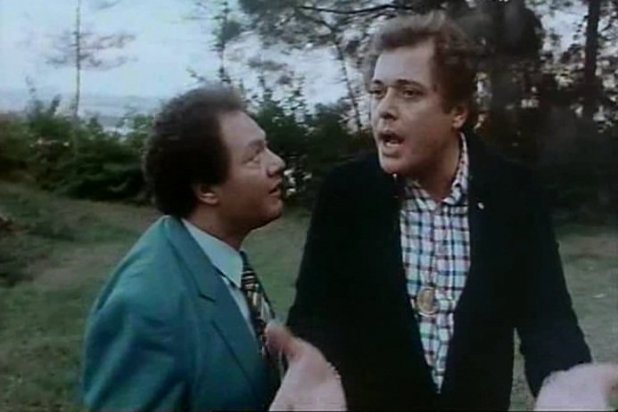 Are drugs an illusion to escape life or do they really affect a person’s happiness?

That was the question late script writer Mahmoud Abou Zaid asked in his masterpiece El-Keif (The High, 1985), which nevertheless ended without a satisfying answer.

Abou Zaid shows us the difference between two brothers who grew up in the same family. One is chemist, Salah (Yahia El-Fakharany), who has a wife and child and struggles for a better quality of life.

His brother Gamal (Mahmoud Abdel Aziz), on the other hand, is a manager of a low-class local band. Known as Mazagangy for his playboy attitude, he is a drug consumer who dropped out of law school.

In the film, Salah cooks a fake mixture that could be mistaken for hashish in colour, smell, and even in taste, just to prove to Gamal that drugs are a psychological illusion which have no real affect. Salah ends up cooking the stuff for Gamal, who sells it as narcotics to actual drug dealers.

The script spins together a great harmony between two poles in society, and managed to have them meet in certain points in life. The dialogue includes a special language for each one of the main characters. Salah is the one who always speaks in the name of science and wisdom, while Mazagangy replies with a very colloquial funny language that is hardly understandable, creating brilliant, deep conversations between the educated class and the popular class without losing track.

The result of this is a comical back and forth dialogue, which Abou Zaid succeeded in bringing to life, along with songs to avoid boredom from the lengthy debates between the two. Nevertheless, these conversations were El-Keif’s signature, contributing to its success from the 1980s until now.

The storyline also draws a similarity between drugs and the decline of art, which Abou Zaid presented in shaabi music, by describing both as poisoning to the brain and presenting Mazagangy as a mixture of both of them.

The script gave each character a gang name which suits their personality, such as Al-Bahz Beh for the wealthy drug lord (Gamil Rateb), and Stamony for the unusual song writer.

Abou Zaid wants to deliver a message to the audience that there are no good intentions in using drugs—that is why he created a battle between good and evil, reflected in the discrepancy between the good intentions of the two brothers who sold fake drugs without intending harm, and that of Bahz Beh who used their formula and mixed it with amphetamines to be more effective and deadly.

Nevertheless, behind the comedy, Abou Zaid blamed Egypt’s “open-door policy”, and accused it of helping the expansion of the drug business in the 1980s, as well as for creating a gap between different segments of society. This gap, Abou Zaid argues, led to the popularisation of shaabi music, which he saw as a sign of decline in artistic taste.

Abou Zaid’s writing gives the characters two paths in life to choose from: either the path of good deeds or the path of doom.

Hence, Abou Zaid’s endings usually tend to use religious quotes or words of wisdom to explain a certain message, leaving his audience with certainty, while refusing them the benefit of the doubt. This leaves no space for the mind to wander off to present another explanation for his pieces.