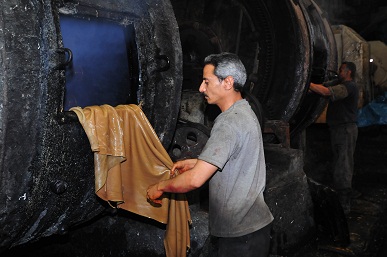 A new cooperation protocol between Cairo for Investment and Real Estate Development Company and Banque Misr was signed on Thursday. The protocol is meant to finance the purchase of land, machinery and production requirements of the new leather tanneries in Rubeiky, Badr City, through low interest loans. The signing ceremony was attended by the Industry and Trade Minister Tarek Kabil.

Kabil announced that the ministry approved a new package of incentives for the first 10 leather tanneries which move to Rubeiky, including technical support and financial aids as well as credit programs and additional land for the factories.

He pointed out that this initiative aims to encourage investment in the first integrated tannery city, adding that the launch of the first ten factories would stimulate other leather factories to move there permanently. Kabil said that this agreement supports the government’s efforts to promote the national industry and achieve economic growth.

The new cooperation protocol supports small- to medium-sized enterprises and provides financing programs with low interests. He added that businesses with capital ranging between EGP 1m-20m will be financed with an interest rate amounting to 5%, while medium-sized enterprises with capital ranging between EGP 20m-100m will be financed with a 7% interest rate, the chairperson of Banque Misr Mohamed El-Etribi said.

He added that the funding period will range between one and 10 years with a grace period of up to two years from the date of receiving the factory. The financing of machinery and equipment will be determined according to the client’s needs with a minimum of 25% of new machinery and 40% of used machines.

Mohamed El-Gohary, chairperson and managing director of Cairo for Investment and Real Estate Development Company pointed out that the new leather city benefits from Italian expertise and the company has already completed the basic structure of the first and second phases, of the project.

Ministry starting operations of 5 tanneries end of May