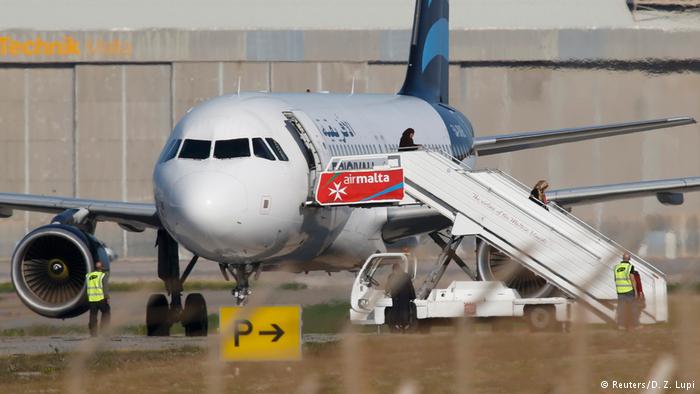 All passengers have been evacuated from the hijacked Libyan airliner in Malta, the island’s state broadcaster said on Friday. The two Libyan hijackers have also left the plane with final crew members and requested an asylum in the small European nation.

The state-owned Afriqiyah Airways A320 jet was flying an internal route from Sebha to Tripoli carrying 111 passengers and seven crew members, when it was hijacked and forced to land on the Mediterranean island.

Maltese Prime Minister Joseph Muscat confirmed that over 100 civilians have left the plane and that some crew members were also allowed to leave. Earlier he tweeted that 82 males, 28 females and one infant are on board of the aircraft.

A Libyan lawmaker who spoke to a colleague aboard the flight, said that there were two hijackers armed with hand grenades. They appear to be in their mid 20, deputy Hadi al-Saghir said after allegedly speaking to fellow member of parliament, Abdusalem Mrabit, aboard the flight.

Maltese state television TVM said the hijackers threatened to explode the plane if their demands were not met. The demands, however, were not immediately clear. The Times of Malta reported that the suspects were from a Libyan pro-Gadhafi group Al Fatah Al Gadida, and one of them was seen waving a green flag, presumed to be an old flag of Libya, from the plane’s door.

The airport added that all emergency teams had been dispatched to the site of what it called an “unlawful interference” on the tarmac.

Troops are positioned a few hundred meters from the plane.

The pilot of the Afriqiyah Airways plane told the Tripoli control tower that the aircraft had been hijacked, a senior security official at Tripoli’s Mitiga airport told Reuters news agency.

“The pilot reported to the control tower in Tripoli that they were being hijacked, then they lost communication with him,” the official said on condition of anonymity.

“The pilot tried very hard to have them land at the correct destination but they refused,” the official added.

Flights in or out of the airport were initially delayed or diverted – including a Lufthansa flight – but airport operations have meanwhile resumed. The tiny Mediterranean island of Malta is located around 500 km (300 miles) north of the Libyan coast.

The last major hijacking in Malta took place in 1985 when Palestinian militants took over an Egyptair plane. Dozens of people were killed when Egyptian commandos stormed the aircraft.