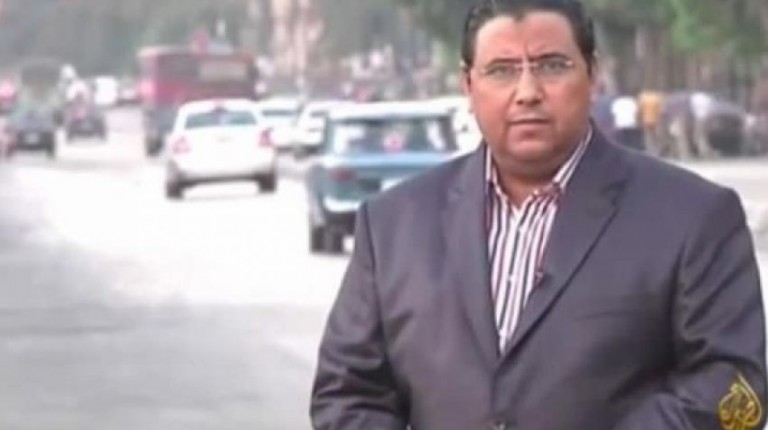 The Al-Jazeera news channel announced on Friday the arrest of its news producer Mahmoud Hussein in Egypt by members of the state’s security apparatus.

The channel said in a Facebook post that the arrest took place on Thursday night, adding that they do not currently know the whereabouts of Hussein.

A security source in the Cairo Security Directorate told Daily News Egypt that they are looking into Hussein’s passport and the prosecution will take over the case. The source who spoke anonymously didn’t state the charges the journalist is facing.

The media office of the Egyptian Ministry of Interior was contacted for clarification or comment, but a representative was not present.

Meanwhile, Al-Jazeera held Egyptian authorities responsible for Hussein’s safety. The network called on human rights organisations to “defend him” asserting that “journalism is not a crime.”

A local human rights group, Al-Shehab Centre for Human Rights, reported that in addition to Hussein, two of his brothers were also detained. The centre said Hussein had been on vacation when security forces allegedly detained him on Tuesday for 15 hours. During this time his passport was allegedly confiscated and his brothers were arrested shortly after,

The Al-Bawaba news portal, a pro-state media outlet owned by the controversial member of parliament Abdel Rahim Ali, published an article citing anonymous security sources which accuses Hussein of attempting to incite the toppling of the regime.

The newspaper reported that Hussein was making videos that were damaging to state institutions and without the permission of Egyptian authorities. The videos, the article claims, “distorted the efforts of the state and incited against the regime.”

Hussein worked in Al-Jazeera’s Cairo bureau until it was shut down in 2013. he has since worked for the network’s Qatar bureau.

Al-Jazeera has become a controversial network in Egypt, particularly following the ouster of the former president Mohamed Morsi. Al-Jazeera has been criticised for its apparent bias in favour of the Muslim Brotherhood.

The channel produced a documentary last month tackling military conscription in Egypt. The documentary was met with widespread criticism from state institutions and proponents of the army.