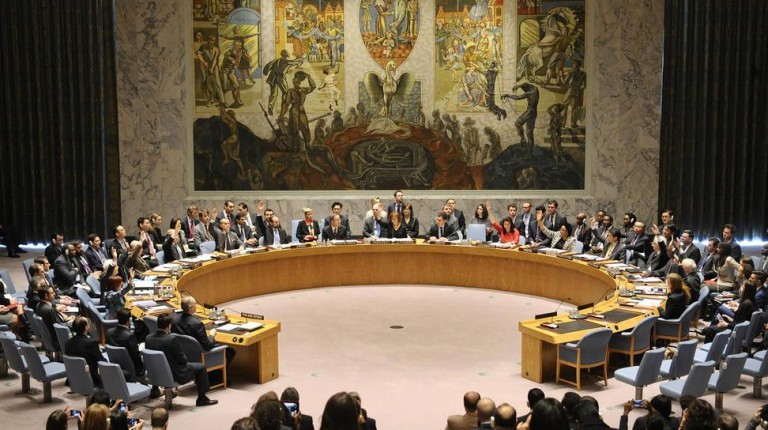 The UN security council voted on Friday in favour of a draft resolution that reaffirms the illegality of the Israeli settlements built within the Palestinian territories, after Egypt did not file its resolution that was scheduled to be voted on Thursday.

The adopted resolution, filed by New Zealand, Senegal, Malaysia, and Venezuela, was approved by 14 countries. The United States abstained from voting and did not veto the resolution—a move that has been depicted as an explicit act of defiance to president-elect Donald Trump and Israel’s prime minister Benjamin Netanyahu.

Egypt had prepared a draft resolution that demanded the immediate and complete cease of building Israeli settlements on Palestinian land. However, the country decided not to proceed with a voting session, claiming that more time was needed to review the resolution and make sure that there is a consensus from all the council’s state members. It further added that the US may have vetoed the resolution.

The four UN security council members that filed the adopted resolution, however, did not approve of Egypt’s withdrawal and filed their own draft resolution that Egypt voted in favour of.

Citing diplomats and Israeli media outlets, Egypt did not proceed with its draft resolution because it was subject to pressures from Israel and Trump. Trump made a phone call to president Abdel Fattah Al-Sisi in which they agreed that the new US administration will work to trigger talks between Palestine and Israel to reach an inclusive and final solution.

Egypt was severely criticised after it backpedalled from filing its resolution, as it is the only Arab country that is currently a member of the UN security council. Before Egypt withdrew its resolution, it was considered almost final and it was assumed that the US would not cast a veto vote.

Egypt’s Foreign Affairs Ministry issued a justification statement in which it said that the Palestinian side insisted on voting on the resolution while there were doubts that it may have been vetoed by the US. Thus, Egypt could not proceed with voting. However, it encouraged other countries to file the resolution.

Egyptian Socialist party chairperson Ahmed Bahaa El-Din Shaaban told Daily News Egypt that Israel has not committed to any of the previous resolutions that condemned its illegal settlements which were also adopted by the council. However, he said that Egypt’s decision was a disgrace and shameful.

Shaaban said that Egypt had two solutions: either to file the resolution despite any foreign pressure, or not to suggest a draft resolution from the beginning. He further added that the justification of Egypt’s Foreign Affairs Ministry is “pale, fragile, and irrational”.

Political analyst Abdel Moneim Al-Saeed told Daily News Egypt that Egypt tried to win both sides, as it complied with Trump’s desire to withdraw from adopting the draft resolution and at the same time voted in favour of the filed resolution in the UN security council.

Al-Saeed said that Trump promised Al-Sisi that under his administration the US would prioritise the Palestinian case and would look for a more inclusive and final solution to the conflict, and Egypt did not want to lose this privilege.

He further added that the decision has political benefits; however, the negotiations have other dynamics and pathways. Egypt knew that the draft resolution would have been filed anyway; however, it opted for adhering to the promises of Trump as part of more inclusive political solutions that are currently being taken in the Middle East, Al-Saeed said.

He further added that Russia, Turkey, Iran, and Syria are on their way to reaching a political solution in Syria, and the situation in Palestine needs an inclusive solution rather than the usual painkillers.

Al-Saeed concluded by saying that there have been two previous resolutions in the UN security council against Israel that were also not vetoed by the US, so no one should rely on the current resolution because Israel can refuse to abide by its terms.

Foreign Affairs Minister Sameh Shoukry received on Saturday a phone call from Saeb Erekat, chief of the Palestinian Liberation Organisation (PLO), in which the latter praised Egypt’s voting in favour of the draft resolution in the UN security council. He also said that Palestinian citizens have trust in Egypt’s stance on the Palestinian case. Foreign Affairs Ministry spokesperson Ahmed Abou Zaid said that the countries that have the right to veto were not really obvious in terms of their position, but Egypt’s stance is clear as it voted in favour of the suggested resolution.

Political science professor Hassan Nafaa told Daily News Egypt that legally the resolution that was approved by the UN security council is binding and Israel should respect and abide by its terms. He added that Egypt’s reversing from filing its resolution is a result of American and Israeli pressure. However, Egypt’s move has not done its reputation any good, and was embarrassing to its position on a local, regional, and international level. He concluded by saying that Egypt’s actions will have bad repercussions on its future position in the region.

Fourteen countries voted in favour of the draft resolution, and they have to be committed to implementing this resolution, political analyst Saeed Al-Lawendy told Daily News Egypt. He further added there were several resolutions previously adopted by the UN security council and Israel did not abide by any of them.

Al-Lawendy said that Egypt’s position cannot be questioned as it is the only Arab country that keeps on pushing for solutions in the Palestinian-Israeli conflict. He concluded by saying that the Palestinian-Israeli talks may be pushed forward under Trump’s administration because he is intending to alter all foreign policies that were adopted by president Barack Obama and previous administrations.

Following the vote, UN director at Human Rights Watch (HRW) Louis Charbonneau said: “Today’s UN security council vote rebukes those seeking to reverse universally accepted international law on the illegality of Israeli settlements in the West Bank. Malaysia, New Zealand, Senegal, and Venezuela should be commended for pushing this resolution forward after Egypt balked under political pressure before voting in favour of the final resolution.”

Political sociologist Saeed Sadek told Daily News Egypt that Egypt was aware that there is no absolute victory and no absolute loss in this case. However, Egypt benefited from its stance more than it lost, as it maintained good relations with Trump and Israel, and both countries have not criticised its stance.

First, the bilateral relations between Egypt and Israel are strategic, because without Israel the Islamic State (IS) would have taken over Al-Arish city in the Sinai Peninsula, and Egypt opted for what would benefit its interest, Sadek said.

The political sociologist further added that the bilateral relations between Egypt and the US were tense under the Obama administration, noting that Obama has not invited Al-Sisi to visit the White House in the past three years. However, in his meeting with Trump, it became clear that relations between the two countries would improve. Trump invited Al-Sisi to visit the White House as soon as he takes office as president in January.

Sadek said that the Palestinian conflict is no longer on the top of the Arabs’ agenda, due to the turmoil in several Arab countries following 2011. He added that all the Arab countries are implicitly maintaining good relations with Israel, and Egypt is doing the same without hiding in unannounced deals.

On the adopted resolution, Sadek said that it is deemed as a victory; however, it is not binding whatsoever and several resolutions were adopted prior to the current one and Israel did not adhere to them.

As for the severe criticism the draft resolution has received, Sadek said that only those who are criticising and not siding with Al-Sisi are opposing Egypt’s foreign policy. He added that most of the media outlets are financed by Gulf countries which invest in criticising the Egyptian president and describing him as a traitor, when in fact the Egyptian regime is practical, pragmatic, and realistic.

The UN security council resolution was the first to address the Palestinian-Israeli conflict in eight years. The US has been acting as a shield for Israel in the UN security council and has vetoed dozens of previous resolutions; however, it turned down its support for Israel in Friday’s voting session. US ambassador to the UN Samantha Power said that the resolution is reflecting facts on the ground and is consistent with US policy across Republican and Democratic administrations.

However, several Republican and Democratic figures have publicly condemned the resolution against Israel.

Netanyahu also said following the voting that Israel rejects this shameful anti-Israel resolution and will not abide by its terms. Prior to Egypt’s reversed resolution, Netanyahu took to Twitter in the early hours of the morning to call on the US to veto the decision. Obama, however, did not acquiesce to the request.

Bilateral relations between Israel and the US have been tense under the Obama administration due to different stances on Iran, which is expected to shift under a Trump-led administration, as the president-elect is an explicit supporter of Israel.

Israel’s UN ambassador condemned the adopted resolution. He said that it will not lead to peace and depicted it as a “victory for terror”. He added that the resolution is full of lies and is one more resolution in the long shameful list of the anti-Israel resolutions in the UN security council.

Trump also took to Twitter following the vote and said: “As to the UN, things will be different after 20 January”. Trump is direct in terms of his explicit support for Israel, and he was among several lawmakers who called on Obama to veto the decision.

Arab League secretary general Ahmed Aboul-Gheit said during a ministerial meeting between Arab and European ministers on Wednesday that there should be efforts from the European Union (EU) and the international community to block Israel’s attempts to obtain a seat on the UN security council.

There were several previous resolutions adopted by the UN security council regarding the Palestinian-Israeli conflict. In 1979, the council voted in favour of a resolution that stipulates the illegality of the Israeli settlements in Palestine’s West Bank, East Jerusalem, and Gaza strip. Israel has clearly not abided by these terms.

In general, and despite conflicting statements made by political analysts, resolutions adopted by the UN security council are considered binding. However, legal scholars have different opinions on the matter. Israel has violated the terms of several previous resolutions and has not been subject to legal measures.