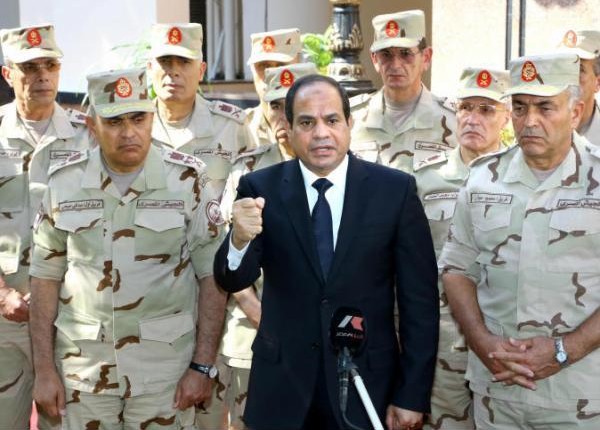 The Ministry of Interior said in a statement on Saturday that two people suspected of having participated in the assassination of the head of the army’s ninth armour division, major general Adel Ragaai, were killed in a shootout at a security checkpoint in the governorate of Menoufia.

According to the ministry, the checkpoint was part of a coordinated effort to locate the suspects. The statement detailed the ministry’s efforts in locating the suspects, who are allegedly members of a group called Lewaa El-Thewra (Revolution Brigade).

The head of the Egyptian army’s ninth armour division was assassinated in October. Ragaai was ambushed by militants outside his place of residence in Al-Obour City, on the outskirts of Cairo. Lewaa El-Thewra shortly thereafter claimed responsibility for the assassination.

Lewaa El-Thewra, according to the ministry, is an affiliate of the Muslim Brotherhood. The ministry said that investigators managed to discern the identity of the perpetrators by tracing down the registration of the vehicle used in the assassination.

The ministry added that investigators managed to track down the vehicle’s owner and eventually tracked the vehicle down to where the group had prepared for their attack.

“The place is a farm located in the village of Kafr Dawood, which is near El-Sadat City in Menoufia,” the statement claimed. “The farm is owned by a member of the Muslim Brotherhood, Tarek Mohi. The place has been used by members of Lewaa El-Thewra to build improvised explosive devices and make car bombs.”

The ministry said that the group had assassinated Ragaai by using a car bomb, and pointed to similar vehicles allegedly found on Mohi’s farm. This statement, however, contradicted eyewitness reports, the video of the incident released by the group, and military sources who said that Ragaai was not targeted by a car bomb, but rather was killed in a shootout.

Daily News Egypt made several attempts to contact the ministry in order to clarify the statement, but was met with no success.

The ministry explained that the investigators uncovered many weapons at the farm, including Ragaai’s personal handgun, which they say was seized during the assassination.

Directly after having identified the suspects, security forces monitored their movements and discovered they would be travelling to Kafr Dawood village, the statement claimed.

“On the morning of Saturday, and with permission from the prosecution, security checkpoints were placed en route to the village in an attempt to arrest them,” the statement said. “However, as soon as they saw the checkpoint the suspects opened fire.”

The shootout resulted in the deaths of the two suspects.