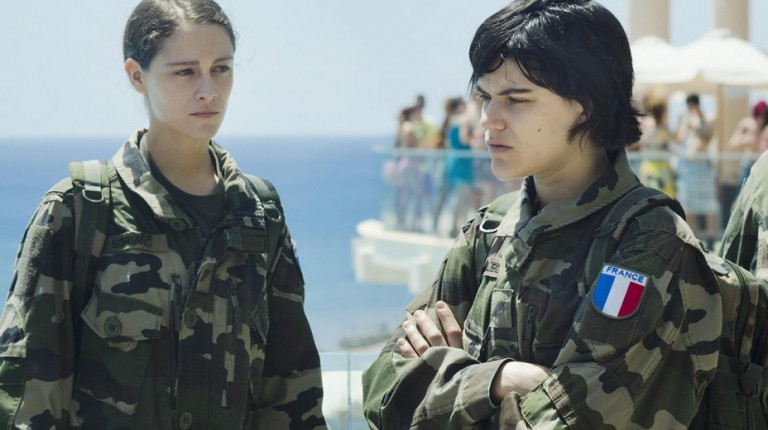 States and decision makers often have unrealistic expectations of wars, such as ending the war before Christmas or bringing the boys home after they are sent to the battlefield. In The Stopover, the boys are very close to home. A French unit coming from combat in Afghanistan is offered a three-day stay in a classy hotel to “debrief”—presumably relax and talk out the horrors they saw.

Initially, the film’s premise gives the indication of a plot about white men who are sent to kill non-white people and then return home in shock. The Stopover is different; having female protagonists sets a new discussion about the hierarchy of women in society and army ranks. The double-layered plot also doesn’t shy away from arguing that the disadvantaged and the impoverished are taken halfway across the world to finish off the dirty business of states. The protagonists are women in a patriarchal social structure and are working in a substructure dominated and ruled by men: the army.

Soldiers are ordered to debrief and talk about their experiences through an actual simulator that can virtually create a live, graphic footage of these people’s memories in combat. Several of the characters talk about combat and ambushes they witnessed, but the director chose not to show scenes of combat through flashbacks in slow-motion. Instead, these scenes can be seen on the faces of the soldiers, their reflexes, and ways of interaction. The cinematography captures their snaps, sexual urges, humane needs, and dilemmas.

“The horror…the horror” is a sentence eternalised in Francis Ford Coppola’s Apocalypse Now, and was used by Colonel Kurtz to describe the misery he saw. In The Stopover, every soldier is expected to mention the horror and go back to France as a sane person. The question is whether this stopover in a five-star hotel can really relieve the soldiers of their near death experience, fighting for “democracy”, or not.