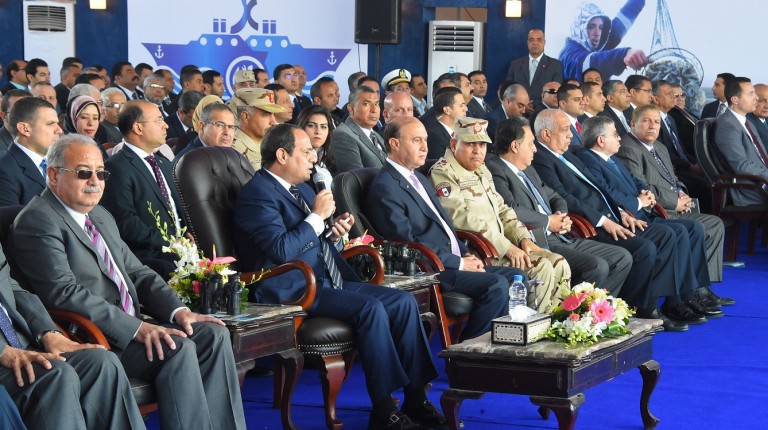 On Wednesday during the opening of the National Project for Fish Farming in the Suez Canal area in Ismailia, President Abdel Fattah Al-Sisi called on Egyptians to endure the economic hardships resulting from governmental reforms for the next six months. During his speech, he reasserted the state’s commitment to its economic reforms, and promised citizens and investors that the situation will improve.

According to Mohamed Erfan, chairperson of the Administrative Control Authority (ACA), the aim of the project is to reduce the gap between consumption and production of seafood, which is currently 700,000 tonnes a year. The project will also create 10,000 jobs.

Erfan added that the project consists of three phases, with 4,000 fish farming pods in total. The first phase contains 1,029 pods, of which 600 have already been farmed with various species. He added that 12 fishing ships have been built to increase the efficiency of Egypt’s fishing fleet, each with a capacity of 50 tonnes.

Al-Sisi explained during his speech that the Suez Canal Authority’s sedimentation ponds were previously unused, and that it is the first time that the state has participated in aquaculture projects. He added that the rest of the project, including two other fish farming projects in Port Said and Kafr El-Sheikh, will be completed by the end of 2017.

Aquaculture accounts for almost 65% of Egypt’s total fish production. Private fish farmers in Egypt account for more than 99% of the fish farmed in aquaculture, according to the UN Food and Agriculture Organization (FAO). Aquaculture is the only viable means by which to reduce the consumption-production gap of fish in Egypt.

Mohamed Magdy, head of the fish farming at the Suez Canal Authority, explained that currently 1.4m tonnes of fish are produced annually, while 2.1m tonnes are being consumed. He said that the current rate of production does not reflect Egypt’s full potential.

He added that the project is established on an area of 7,500 feddans, east of the sedimentation ponds all along the Suez Canal. In addition to the ponds, the projects will include a hatchery, a commercial fish feed, and a packaging factory. The production target for the first phase is 8,000-10,000 tonnes per cycle.

According to the former dean of the Fish Farming and Technology Institute at Suez Canal University, Tariq Rashid Rahmi, the productivity of these projects may be able to cover Egypt’s demand. He added that fish could become a substitute source of protein in the wake of rising meat and poultry prices.

Rahmi explained that aquaculture can have a positive effect in regards to economic development, as it may lead to self-sufficiency and reducing imports. He pointed out that the project’s proximity to the ports in Damietta, Suez, and Port Said, in addition to its proximity to Greater Cairo, will reduce transportation costs and rates of spoilage.