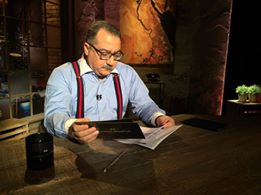 The controversial TV anchor clarified in a statement issued on the Facebook page of his newspaper Al-Maqal, which was issued simultaneously with the one issued by Al Qahera Wel Nas, that he was the one who decided the show would be suspended.

His talk show, titled “Maa Ibrahim Eissa”, gained traction among viewers, which attracted “pressures” from outside. In his statement, Eissa did not clarify what he meant by “pressures”.

Such “pressures” led Eissa to decide to suspend his show for an indefinite period.
“I would like to express my gratitude to the audience of ‘Maa Ibrahim Eissa’ which is broadcast on Al Qahera Wel Nas channel. The audience gave my show great meaning due to the attention it received. This led to controversy, which resulted in generating pressure on the show,” said Eissa in his statement.

According to Eissa’s statement, his talk show contributed to enlightening his audience but it also caused outrage among others, which resulted in “pressures” on his show.

Al Qahera Wel Nas said that Eissa’s decision to suspend his show went into effect at the start of the new year.

The channel said that Eissa presented its administration with the reasons behind his decision, which were justified in turn by him stating that he would like to work full-time on his editorial projects in the future.

During 2016, a number of TV presenters either decided to suspend their talk shows or were kicked off air by their channels for stating their views on political cases.

In October 2016, many prominent TV anchors were subjected to suspensions or restrictions by privately-run channels.

The first instance occurred when TV anchor Rania Badawy was suspended after just one episode of her talk show with renowned anchor Amr Adib. The show had aired on the privately-owned ONTV, which was recently bought out by business tycoon Ahmed Abou Hashima.

The suspension decision came from the channel’s administration, which said in a statement that Badawy lacked professionalism following her criticism of Investment Minister Dalia Khorshid’s performance. Badawy had said that Khorshid was the worst minister in the government.

Also in October, TV host Amr El-Leithy’s show was suspended from the privately-owned Al-Hayah channel, after he broadcasted a video in which a tuk-tuk driver harshly criticised the living conditions in Egypt.

Following the suspension, El-Leithy took to Twitter to deny that his TV show was suspended, but rather halted because of his annual vacation. However, the programme has not yet returned.

Also in October, TV presenter Moataz Al-Demerdash saw the first episode of his show, which featured former top auditor Hisham Geneina as a guest, banned from being aired.

The episode was slated to be the first for his new show on the privately-owned Mehwar channel after his long-term absence from the airwaves.

The channel issued a statement clarifying that the episode had been banned as the result of legal concerns that could have posed harm to the channel given that Geneina’s trial was still ongoing.

In June 2016, Lebanese TV host Liliane Daoud announced that her contract with ONTV would end, shortly after the channel was acquired by Abou Hashima.

A few hours following the announcement, Daoud’s house was raided and she was deported. According to her lawyer, Zeyad Elelaimy, eight men who claimed to be from the Egyptian Passport Control Authority raided her house and forcibly took her to the airport to be deported to Lebanon.

Daoud hosted a TV show called “The full picture” as a part of her contract with the channel; however, the TV show was deemed as opposing to the current regime.

In May 2016, TV presenter Azza El-Hennawy was suspended from state-owned TV over her comments that criticised President Abdel Fattah Al-Sisi. Al-Hennawy previously told Daily News Egypt that she was dismissed for “lacking neutrality” and “distorting the presidential image in front of the general public”.

The politics of fear