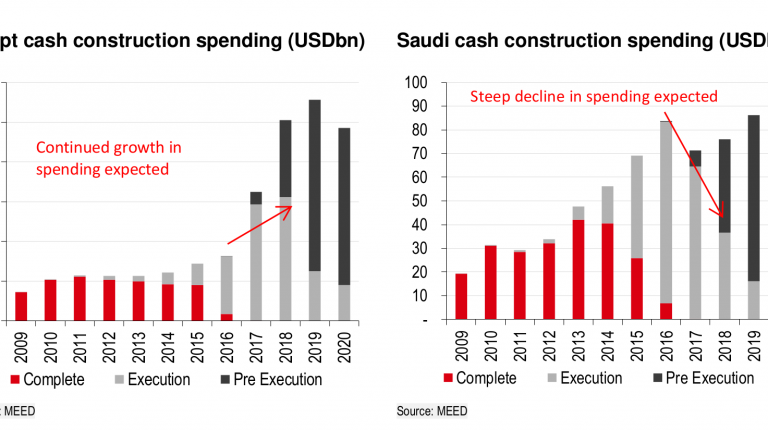 The MENA construction sector is surprisingly diverse in terms of exposure, profitability, and metrics, making it difficult to draw broad conclusions, yet currently Egypt is the most prosperous construction market in the Middle East and North Africa (MENA) region despite the effect of the currency’s devaluation and the high inflation rate, according to HSBC’s “MENA construction” report issued on Wednesday.

One of the main drivers for the Egyptian construction sector is the infrastructure projects initiated by President Abdel Fattah Al-Sisi. Such projects have generated good profit margins and timely cash payments, which is expected to continue in 2017 as well since Egypt is expected to see a 95% increase in cash spending while on the other hand Saudi Arabia is expected to witness a drop of 15%.

The report also said that Gulf Cooperation Council (GCC) countries’ construction sector will shrink. The report explains that the expected decrease in the GCC construction sector is due to a period of incredible revenues growth and spending increases in 2014. Adding that the capital spending would bear the brunt of the spending declines, yet the cuts to current spending, including salaries and benefits for government employees has greatly affected the scale of the problem for the GCC.

Moreover, the loss in oil revenue that registered at more than $150bn with oil at $50, versus oil at $75, was another reason that affected the sector. To balance budgets, the majority of the GCC needs oil prices to rise above $60 per barrel, while in the case of Saudi Arabia it is likely somewhere closer to $80 per barrel. With weakness in current spending carrying higher risk than capital spending, the report concludes that the GCC will continue to see limited new awards and cash conservation until oil recovers.

In terms of cash cycle analysis the report ranks Orascom Construction and Elsewedy Electric as the best in cash metrics, despite the fact that each of the contracting companies has its own mix of businesses and geographies, making direct comparisons difficult. However, the cash management strategy and execution can be compared between companies.

Orascom Construction has a geographically diversified portfolio, across the MENA region with 72.4% of backlog in the region and 27.6% in the US. The geographical diversity has reduced the effect of the problems faced by the GCC to less than 10% of its backlog. Furthermore, the company has generally managed projects better than others in the sector, with working capital/sales averaging 13% over the past five years compared with an average of 49% across all of the MENA contractors covered in the report.