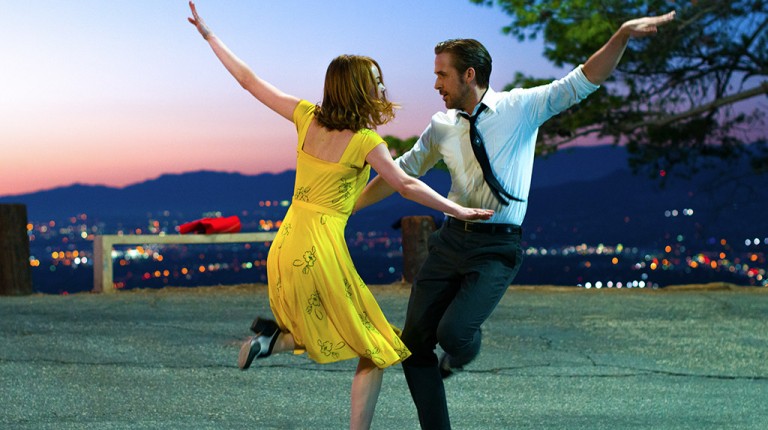 Hitting Egyptian theatres on Wednesday, La La Land—one of the most anticipated American films of 2016—marks the return of musicals to the arena of international film releases around the world. It provides the escapism that the audience deserves after a whole year of disappointing films. This is a film for anyone who enjoys going to the film theatre and having a great time.

La La Land takes the audience through the journey of Mia, an aspiring actress (Emma Stone), and Sebastian (Ryan Gosling), a talented jazz musician, who fall in love while trying to make it big in Los Angeles. While the plot seems like the generic love story under the lights of a beautiful city at the beginning, it turns out to be more than that as the ending of its second act approaches. As the plot delves more into how the protagonists get affected by their surroundings and the decisions that they have to make, it explores deeper sides of their characters.

La La Land is written and directed by Damien Chazelle, the visionary director behind Whiplash (2014). While both films deal with very similar ideas—namely the struggle of youth to find a place for themselves in a tremendously competitive world, the definition of self-worth, and the deterioration of jazz music, to name a few—one could find it hard to believe that they are brought to life by the same director. Whiplash is a film that feels like a punch of adrenaline from beginning to end. Its linear plot is energised by fast cuts, drum roll sound effect that is nearly present in all scenes, and the sheer intensity that the cast displays on screen.

In La La Land, on the other hand, Chazelle offers the viewer a very different experience. The film has an intricately convoluted narrative that could jump between fantasy and realism and take leaps between different timelines, yet have a relaxing flow throughout. Chazelle also manages to find the suitable spots to add some funny moments to his script, allowing the characters to feel more relatable.

Gosling and Stone, who both give stellar performances, play the film’s lead characters. For their very demanding roles, the actors were required to sing live on set, perform several dance choreographies, and Gosling had to take daily intensive piano classes in order to look like a professional playing his favourite instrument on screen. Yet, it never shows that the actors are out of their elements. Instead, the film showcases some of their hidden abilities that were never shown on screen before.

There is an almost out-worldly effect that accompanies La La Land from the very first scene. This magical feeling comes as a result of several elements. From the colourful look of the whole universe that Chazelle and cinematographer Linus Sandgren create, to the set decorations and frame compositions that resemble classic musicals, yet feel original and definitive of this era, to the smoothly swift camera movements, to the beautiful music and awe-inspiring songs, to the oozing chemistry between the two leading stars, it all contributes to a visually stunning and an emotionally charged end result.

La La Land received rave reviews from critics and filmgoers from all around the globe. It won several awards, including the award for best picture and best director from various film festivals and was named Best Film of 2016 by many film sites. It is currently making some Oscar buzz as it is considered by many to be the closest contender to grab the Best Picture Academy Award for 2017 along with getting at least nominated in other major categories (especially for the song City of Stars in the Best Original Song category, as it stands out from the whole soundtrack as it is as heartfelt and informative as the film’s plot).

All in all, La La Land is a musical that is as important to the musical genre as the classics it pays tribute to (Singin’ in the Rain, Shall We Dance) and is one of the most entertaining films of the year.