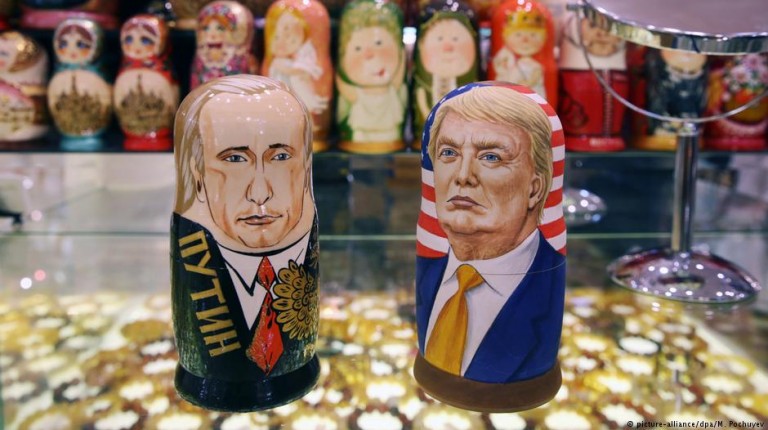 The United States and Russia have had diplomatic relations for 25 years. Though they are rather frosty at the moment, President-elect Donald Trump wants to thaw them. But Russia could be double-dealing.US President-elect Donald Trump recently praised Russian soon-to-be-counterpart Vladimir Putin as “very smart.” The comment came after Putin announced he would not pay back current President Barack Obama’s expulsion of 35 Russian diplomats in kind. Trump has repeatedly voiced his admiration for Putin and his authoritarian style of governance. That has irritated many in the US. But Trump’s announcement that he would cooperate with Russia in the war against terror carries more weight for others, says Sebastian Feyock, a research assistant at the Berlin-based German Council on Foreign Relations think tank. Trump is convinced that the greatest threat of Islamic terror is emanating from Syria.

“The current US administration under Barack Obama has refused to work with Russia, because the Russian president has been willing to help the Syrian regime at any cost,” says Feyock. Trump clearly distanced himself from the Obama administration during last year’s US presidential election. “One can deduce from Trump’s statements that he probably doesn’t care about Russia’s backing of the Syrian military.”

Feyock thinks this all sounds like the repetitive restart of bilateral relations. That is the same thing that Obama wanted at the beginning of his presidency. His then-secretary of state, Hillary Clinton, and Russian Foreign Minister Sergey Lavrov even pressed a symbolic “reset” button together in 2009. It did not amount to much, though.

Trump wants to do things differently. He says he’s a deal maker, and that Putin is also looking for a good deal. Trump is convinced that they can work something out. Yet, as in so many other areas, the public has no idea whatsoever if Trump even has a plan. It is clear, however, that he intends to make Rex Tillerson his secretary of state. Tillerson, the CEO of global oil giant ExxonMobil, maintains close ties with the Kremlin. The German magazine “Spiegel” went so far as to call him a “Russian agent.”

Trump’s rhetoric regarding Russia has given many political commentators in the US heartburn, says Feyock. “They say that Trump could be the third president in a row to let Putin lead them around by the nose, only to dupe the USA in the end.”

Volker Weichsel, an editor at the magazine “Osteuropa” (Eastern Europe), sees a similar danger: “The day of discord will come,” he predicts. Weichsel also does not think that personal friendships count for much in politics. “We might see some fireworks celebrating this new rapprochement, but they will burn out fast.”

Weichsel is of the opinion that one should not put too much stock in the public statements that have been made by both sides so far. He says that structural factors are much more decisive – and that the rivalry between the two countries remains constant. For Putin seeks to cement his domestic legitimacy through anti-Americanism: “He is constantly pushing the image of an enemy: ‘We are being attacked by the USA and have to defend ourselves, the USA is to blame for everything – for Russia’s demise, for it’s poor economic situation.’ That won’t change with Trump.”

According to Weichsel, it isn’t a contradiction that Putin says nice things about Trump to the wider world, because he is using a completely different rhetoric than at home. It doesn’t hurt to praise Trump as long as he himself keeps announcing things that could be in Russia’s interest – such as less US influence in Eastern Europe. It is just “a way of mollifying him.” At his annual press conference, Putin said of US President-elect Trump: “No one believed he would win, except us.”

Weichsel believes that the next step could be that Russia tests Trump’s resolve in the Baltics. “The apparent rapprochement will end as soon as Trump draws a red line.” What happens up until that point will be decisive.

Unrealistic that Trump will go it alone

Trump will not be able to define US policy toward Russia by himself. And his coziness with Mosow will put him at odds with his own party. Feyock points out that many Republicans have been in the Senate for a long time and do not need Trump’s favor. They also have set opinions about Russia, and those opinions tend to be very critical. Two of those senators are John McCain and Linsey Graham. Both men have been strong proponents of creating an investigative committee to look into the Russian intelligence service’s alleged meddling in the US election. McCain told the broadcaster Fox News that the US should “increase sanctions on Russia for this misbehavior.” Feyock says that both senators have clearly aligned themselves against Trump with such statements. Trump has said that he is doubtful of Russian meddling and has declared an investigation unnecessary.

Both senators have been touring the Baltics, Georgia and Ukraine over the last several days in order to reassure them of Washington’s unwavering support – despite Trump’s overtures toward Russia. During the trip McCain called for a permanent US military base in the Baltic region as well as arms shipments to Ukraine for the fight against pro-Russian separatists in the country’s east. “That all shows that Congress is on a collision course with the incoming president when it comes to US-Russian relations,” says Feyock. Even if Trump lifts sanctions against Russia, Congress could impose sanctions of their own, or block the president by using congressional budgetary authority to deny him certain funds or force him to give out money for other specific measures.