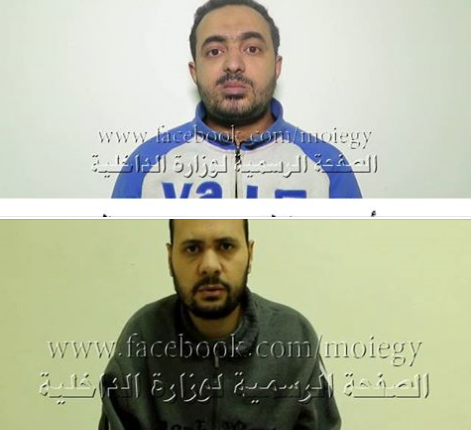 Police arrested on Wednesday three new suspects in connection to the attack on St. Peter and St. Paul church, which claimed the lives of 28 people on 11 December.

The death toll also increased to 28 on Wednesday after a 62-year-old woman died from her injuries while in the hospital, according to the Coptic Orthodox official spokesperson.

The Ministry of Interior published on Wednesday videos of two of the suspects confessing to being part of the cell and aspiring to join the so-called Islamic State (IS).

“I started committing to my religion in 2007,” said one of the two suspects, named Ahmed Atef Awad Saleh, at the beginning of his confession. Similarly, the second suspect, Abdel Rahman Abdel Fattah Ali Eweis, said he started “committing” in 2011. Both explained that this was the beginning step to meeting members of the terrorist network.

According to the suspects, the alleged cell is believed to have been managed by Mohab Mostafa El-Sayed Kassem, who is still at large. The ministry had confirmed this in its account on the suspects published on 12 December. It said Kassem had connections with the Muslim Brotherhood in Qatar and ties to the Sinai Province militant group, which has sworn allegiance to IS.

“I met Kassem and his brother Mohsen,” said Saleh, mentioning Eweis, too. He said that after the 25 January Revolution, they participated in Brotherhood protests. Later, they supported Salafist presidential candidate Hazem Abu Ismail and then Mohamed Morsi. Saleh said he was in charge of securing Brotherhood protests and the sit-in at Rabaa Al-Adaweya, using weapons.

“In 2015, Kassem started telling us about IS. He would bring us videos to watch and say that we should travel to Syria or to Sinai. I found out later from his brother Mohsen that Kassem had actually travelled to Sinai,” Saleh added.

“After the church incident, I ran after finding out the others had been arrested. I even left a bag of weapons with a friend,” Saleh concluded as he provided the friend’s full name in the video.

Meanwhile, Eweis said that it was through regular visits to the mosque and attending religious lessons that he met Kassem and the rest of the group. “We used to meet at the mosque or anywhere near Kassem’s house. We talked about the situation in the country,” he said.

Like Saleh, Eweis said that Kassem started introducing them to IS ideology, which he said he was interested in knowing because he wanted to “properly learn the principles of religion”.

Eweis claimed to have asked Kassem several times to help him join the Sinai Province. “It didn’t happen. Six or seven months ago, I heard that he joined them,” Eweis said.

On Wednesday, the ministry also said it arrested Karam Ahmed Abdul Aal Ibrahim, who was wanted along with Kassem, whom in turn remains on the loose.

The man who carried out the attack was identified as 22-year-old Mahmoud Shafiq Mohamed Mostafa, as announced by President Abdel Fattah Al-Sisi himself on the day after the attack.

On 13 December, IS claimed responsibility for the attack.

With the exception of the woman, the suspects’ names were mentioned in the video confessions of Salah and Eweis. There were no videos or photos for the third suspected, identified as Abdul Hay Nour El-Din Hassassin.