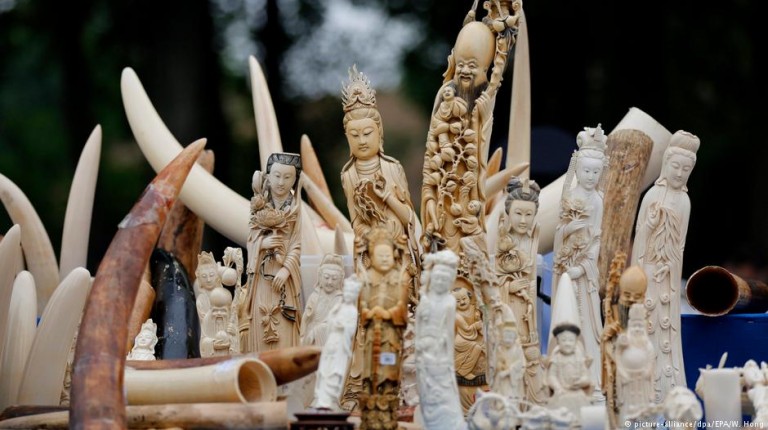 Poachers are killing off elephants for their ivory tusks. China, the world’s largest market for ivory, has announced it will shut down its ivory trade by the end of 2017. Will this help save the iconic animals?China’s decision to ban the trade in ivory by the end of 2017 has been hailed as a “game-changer” by conservationists the world over.

Bergin pointed out how in recent years, numerous entities around the world including the World Bank, European Union, United States government, Interpol, nonprofit organizations and even the royal princes of Britain have all sought to resolve this issue.

“And yet the one entity that really has it within its power to make a big difference on ivory sales is the government of China,” Bergin said.

China’s decision comes on the heels of a resolution at the Convention on International Trade in Endangered Species (CITES) conference in South Africa in October 2016. China will gradually close its 34 ivory processing sites and 143 trading venues in 2017 – the first are scheduled to shut by the end of March.

“Excessive demand of ivory products in Asia, especially in China, contributes largely to [the] elephant poaching crisis in Africa,” acknowledged Zhou Fei, who heads China’s TRAFFIC office and serves as director of the WWF China Wildlife Trade Program, in writing to DW.

“[The] ivory trade ban will effectively reduce the demand in China, therefore help to reverse the decline of wild elephants in Africa.”

China’s move is expected to curb demand for ivory tusks of the elephants. African elephants are classified as “vulnerable” on the IUCN Red List of Endangered Species, and are threatened by poaching and loss of habitat.

“A very significant driver behind the elephant crisis is the demand for ivory. And CITES data shows that China is the largest ivory consumption market,” Aili Kang, Director of the Asia Program of the Wildlife Conservation Society, told DW.

“This is a very big milestone for elephant conservation – although it won’t be the end of the elephant crisis,” she added.

According to estimates, about 20,000 elephants were killed last year for their tusks. Only some 415,000 African elephants are believed to still roam the earth.

Since three of the world’s largest domestic ivory markets – China, Hong Kong and the US – are now being phased out, prospects seem to be looking up for elephants.

Hong Kong has announced earlier it would phase out its domestic ivory trade by 2021, although many hope the city expedites plans after China’s announcement.

There are concerns, however, that Chinese customers could continue to get their ivory fix elsewhere – after all, ivory is considered a good luck charm and a display of wealth.

According to CITES, all commercial international trade in the ivory of African and Asian elephants is prohibited – making buying it elsewhere and bringing it home illegal.

“There is high risk that Chinese consumers are likely to purchase ivory products from neighboring countries as well as in African countries, as there are now over a million Chinese nationals working or living in Africa,” warned Fei.

Vietnam in particular has turned into one of the world’s biggest illegal ivory markets, according to a recent report by the nongovernmental organization Save the Elephants.

“The countries in Southeast Asia need to follow suit to close their ivory markets,” Fei added.

And since China has no plans to purchase any remaining ivory that might be left at the end of the year, there is concern that those pieces of ivory might end up in illegal channels, Fei said.

Another open question is whether China will be able to successfully enforce the ban, as many Chinese might still long for ivory, considered part of their cultural heritage.

“Ivory carving is China’s ‘intangible culture heritage,'” Fei pointed out. Yet wild elephants constitute natural heritage, he continued – and with the elephant poaching crisis, “priority should be given to protection of wild elephants.”

“The ecological and esthetic value of wild elephants is far more than the value of tusk carvings. The culture needs to be changed in order to reduce the demand,” Fei concluded.

According to Kang, that change is already in the works since the government has sent a strong signal to people with the ivory trade ban.

That sentiment was echoed by Bergin. “People want ivory not to consume, but to show off and to be able to invest in and to resell,” he said.

“By making it illegal and by making it sort of politically incorrect to own, it’s going to lose its value. I think the market is going to respond very, very quickly.”