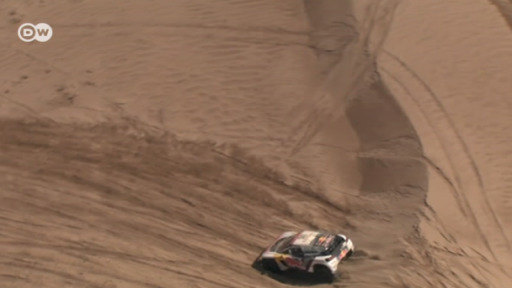 Peugeot celebrated another stage victory at the Dakar Rally. But the fourth stage was not without it’s problems for the French constructors, with Sebastian Loeb and Stephane Peterhansel losing ground.Cyril Despres took the lead in the Dakar Rally with his first victory in the car category, while former rally leader Sebastian Loeb fell back.

Despres moved into the lead from fifth place after negotiating the high-altitude stage, which starts in Argentina’ Jujuy and ends in Bolivia’s Tupiza and features the longest timed section of the race at 416km.

Despres was the one ray of light on a tough day for Peugeot, with Loeb dropping down the order after leading a Peugeot 1-2-3 into the stage. Loeb lost 20 minutes on approach to the second waypoint, a point which saw other competitors lose ground, including teammate Stephane Peterhansel.

Spain’s Carlos Sainz dropped 10 minutes earlier in the stage and later rolled his car and got stuck as he attempted to chase down Despres, allowing the Frenchman to capitalise.

Despres now holds a a seven minute lead in the overall standings, as the race heads to the Bolivian High Plateau passing through two fields of sand dunes on the home stretch.