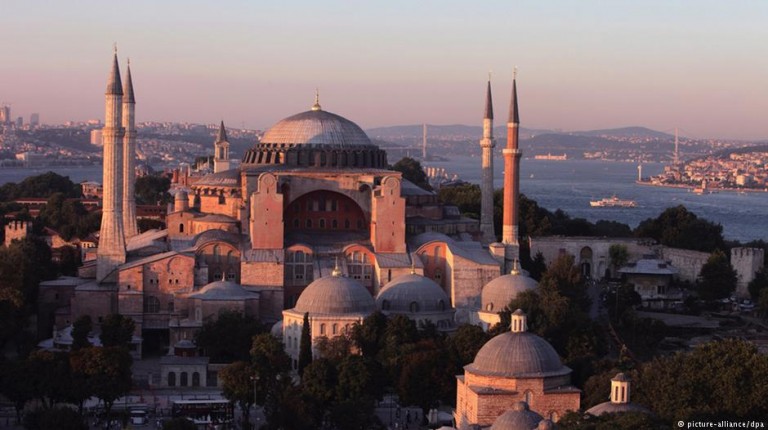 The increasingly Islamist and authoritarian policies of Turkish president Recep Tayyip Erdogan do not stop at the doors of the Hagia Sophia. It seems the government is pursuing a new strategy for the world-famous museum.At midday on the historical peninsula of Istanbul, the few Western tourists who still venture here might feel somewhat bewildered. The call to prayer from the Blue Mosque is nothing unusual, but the call in honor of Allah is now also sounded from the four minarets of what is officially a museum.

So is the Hagia Sophia – the place once known as the “Church of Holy Wisdom” and the city’s most visited museum being turned back into a mosque?

“No,” says Father Dositheos, a spokesman for the Greek Orthodox patriarch of Constantinople. He confirms the Hagia Sophia is and will remain a museum. But “the government is orchestrating things to give its supporters the impression that this status may be subject to change.”

Another part of this strategy is the appointment of an imam for the building that was declared a museum by none other than Turkey’s very first president Mustafa Kemal Ataturk in 1935. In October, Turkey’s powerful Directorate of Religious Affairs, the Diyanet, installed popular Muslim cleric Önder Soy as the Hagia Sofia’s new imam.

In reality, this means that the prayers, under the guidance of Soy, will take place in a building adjacent to the Hagia Sophia, the Hünkar Kasri site, a former sultan’s palace. This is actually nothing new. The prayer room dates back to 1991, when it was installed on orders of former President Turgut Özal. It just wasn’t used much because, in the area surrounding the Hagia Sophia has mostly hotels and shops but few residences . So there simply wasn’t a congregation to serve.

The appointment of Soy, widely known as karate master and a musician, has changed this by drumming up popular interest for the prayers in the museum. “During the week, it’s still sparsely attended, but Friday prayers are packed,” the imam recently told the Turkish newspaper Habertürk.

Another contributory factor was that, on two occasions during Ramadan, the highest Mufti for the inner-city Fatih district, Irfan Üstündag, allowed an imam to make the call to prayer inside the museum. “Many visitors really liked it,” Soy said. He added that even now, outside the holy Muslim fasting month of Ramadan, many tourists come to see him.

The nationality of tourists in Istanbul has changed

Two or three years ago, most of the visitors came from Europe or the US. Now mainly Arab tourists head to the city on the Bosporus. This change is a consequence of several terrorist attacks on Western tourists just as much as of the increasingly Islamist authoritarian policies of President Recep Tayyip Erdogan. Visitors to the Hagia Sophia today will find themselves surrounded by Arab tourists, fully veiled women among them – which only three years ago would have been an extremely rare sight.

To cater for this new target group, Istanbul’s tourism authority has redesigned museum displays. In the large entrance hall, a presentation has been installed with up to six video screens showing the history of the Hagia Sophia. It neglects to mention that the Hagia Sophia was the largest church in the Christian world for over 1,000 years. It begins with the conquest of Constantinople in 1453 and the transformation of the church into a mosque.

The tendency to overlook this important fact is also noticeable inside the museum. Most of the information plaques focus on describing the reconstruction of the former church as a mosque. So the transformation from former church to former mosque and ultimately to a unique religious museum has been lost. Father Dositheos sarcastically commented: “As long as you are allowed to wear shoes in the Hagia Sophia, it will remain a museum.”