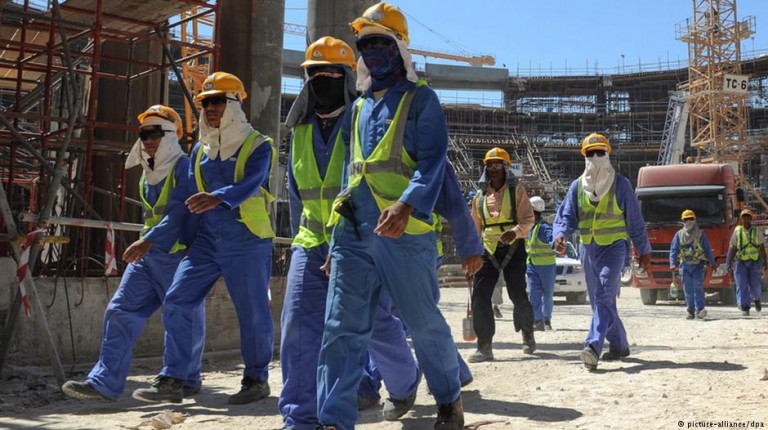 A Swiss court has rejected a claim lodged against FIFA by several trade unions for alleged abuses of workers’ rights in 2022 World Cup host nation Qatar. Football’s world governing body welcomed the news.The Commercial Court of Zurich on Friday rejected a legal challenge by a group of trade unions over working conditions in the country that is to host the 2022 World Cup, Qatar. The suit was filed by Bangladesh Free Trade Union Congress, backed by the Dutch union FNV, on behalf of a Bangladeshi man who says he was exploited in Qatar.

The lawsuit claimed that football’s world governing body, FIFA, had acted wrongfully in choosing Qatar to host the tournament, without having first demanded that the country reform its labor laws – and should be held liable for abuses. Labor and human rights groups have campaigned against a system of employing hundreds of thousands of migrant workers in the gas-rich country.

The court said it didn’t accept the case for “formal reasons” because parts of the complaint, such as calling for new labor laws and courts in Qatar, was too vague or not legal.

“FIFA takes the issue of working conditions and human rights in connection with the 2022 World Cup in Qatar very seriously,” it said in a statement. “FIFA will continue to urge the Qatari authorities to ensure safe and decent working conditions for construction workers.”

FIFA President Gianni Infantino announced in April 2016 that he would establish a body to monitor working conditions in Qatar.

In March 2016, Amnesty International published a report saying workers at the Khalifa International Stadium, mostly from Bangladesh, India and Nepal, were lied to about their salaries, went unpaid for months and were housed in squalid accommodation, which it claimed amounted to forced labor. One of the workers was Nadim Shariful Alam, 32, who belongs to the FNV’s international branch.

“Alam was lured to Qatar with a pretty tale and paid 3,976 euros ($4,400) to a recruiter,” the FNV said in statement last year. “In exchange he had to unload ships for a year-and-a-half as a modern slave, live in dreadful conditions with thousands in a specially-built camp and had to hand in his passport,” the union added.

ILO to Qatar: Put your money where your mouth is or else