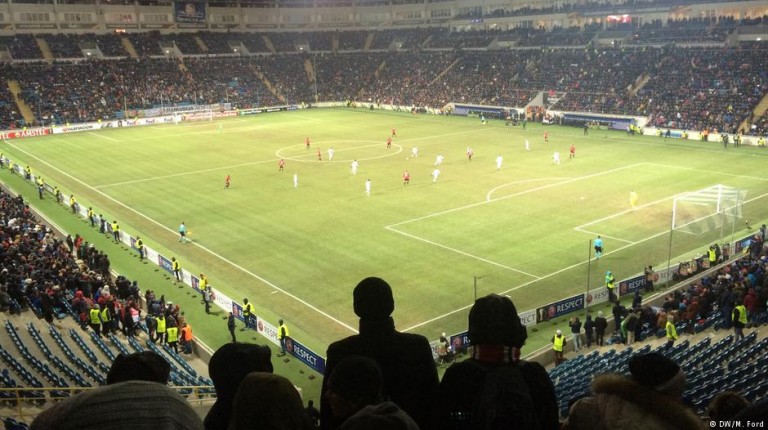 Over a million people have fled eastern Ukraine since the fighting broke out there in 2014. However, football continues in Ukraine, even for a team like Zorya Luhansk, who now play their home games a long way from home.A sleeper train from Kyiv to Odessa speeds south through a frigid December night. As the temperature outside plummets to -12 degrees Celcius (10 degrees Fahrenheit), rumors spread that the pitch at Chornomorets Stadium is frozen and that the match could be called off.

“No chance!” scoffs Vladimir, who is traveling to see his team, FC Zorya Luhansk, play Manchester United in their return match in the Europa League.

The freezing temperatures are the least of FC Zorya’s worries. When Russian-backed separatists took control of their home city of Luhansk in 2014, their stadium was damaged by a mortar strike and the club was forced into exile. They now play their European fixtures 966 kilometers (600 miles) away in Odessa.

“It’s extremely difficult,” Zorya’s CEO, Sergei Rafailov tells DW after we have reached Odessa. “Our entire club infrastructure is still at home in Luhansk. Playing in a different city brings additional costs. We must rent the stadium, the training pitches, the facilities, accommodation.”

Drawn in a tough group with Fenerbahce, Feyenoord and Manchester United, Zorya are playing for pride on this night, having already been knocked out of the Europa League. However, they are third in the Ukrainian Premier League and haven’t given up hope of qualifying for next season’s Champions League.

“It’s a great position to be in and it’s all down to the hard work of everyone at the club in general,” Rafailov says, before adding that through the UEFA funds that it brings the club, the Europa League has been a financial lifeline for Zorya.

It’s not just the club’s staff, who have been forced to relocate – the supporters also find themselves scattered across the vast country which makes attending matches and supporting their team extremely difficult.

In their own stadium in Luhansk, Zorya used to attract average attendances of between 8,000 and 10,000, but now they only get about 1,000 out to their games.

“We are still so thankful to the fans for their support,” Pavel Kozyrev, the club’s press officer says. “Many fans still live in Luhansk and will watch the game on TV but we also have fans who live in different parts of Ukraine… The stadium was sold out three weeks ago.”

Originally from Luhansk, Vladimir now runs a business in Kyiv. He speaks of his pride when his team restricted United to a hard-fought 1-0 win in Manchester in September.

“We only lost 1-0!” he says. “The whole team, including the manager, cost less than Ibrahimovic. It was two teams on two completely different levels competing on the same pitch.”

Fortunately for Vladimir, the pitch at Chornomorets Stadium passed an inspection and the match did go ahead, with United winning 2-0 thanks to goals from Henrikh Mkhitaryan and Zlatan Ibrahimovic, who didn’t seem too badly affected by the cold.

Returning home not an option for now

For the 1,000 visiting supporters from Manchester, it was time to head back home. However, for FC Zorya, there’s no prospect of that happening anytime soon.

“I was in Luhansk in May this year,” says CEO Rafailov. “The stadium has been repaired but in the current situation, we can’t afford its upkeep and maintenance. When can we return home? We don’t know. Nobody knows.”

Zorya’s European adventure may be over for this year, but the fans, wherever they are, will keep supporting their team in the league.

“We’re fighting for second place, the Champions League is a real possibility next season,” Vladimir says. “The lads have such fantastic willpower. They are real men, real fighters. They’ve lost their families, they’ve lost their homes, and they’ve lost their city. “We’re so proud of them. We may have lost our city but we’ve found our team.”