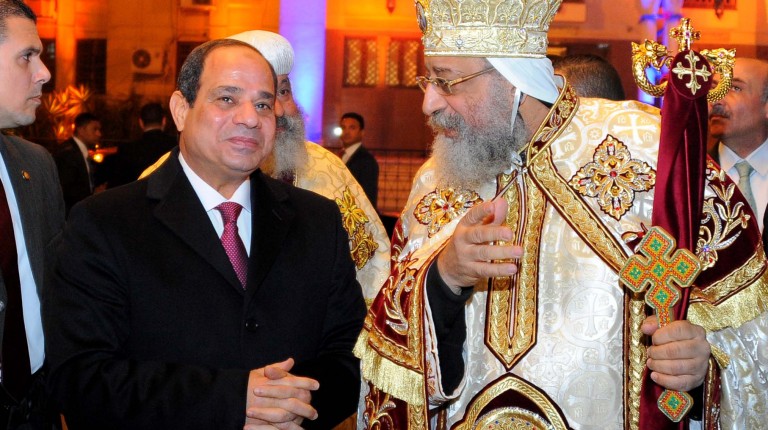 President Abdel Fattah Al-Sisi said on Friday that there will be a big church in the New Administrative Capital, and he will be the first to contribute towards building this church alongside a mosque.

Al-Sisi gave a speech during the rituals and prayers that were held at Cairo’s main cathedral to celebrate Coptic Christmas eve, in which he said that next year will mark the 50th anniversary of the cathedral, and that next year will also be the inauguration of the new church. He added that the church and a mosque will be built side by side to reflect the respect Egyptians have for each other.

Al-Sisi announced that all churches that were damaged over the past three years have been restored. He went on to say that Pope Tawadros II didn’t once mention the restoration of damaged churches, even though it is the right of Copts.

However, he said that there are two churches in Minya and Al-Arish that still lack paint, promising that they will be finalised in the next 10 days.

In an interview with state-owned TV on Saturday, Pope Tawadros II expressed his gratitude to Al-Sisi for celebrating Christmas. He added that the president surprises the Copts every year by attending the celebrations. The pope also said that building a big church and a mosque in the New Administrative Capital is good news for all Egyptians.

During Friday prayers, the pope expressed his deep condolences to the victims of the attack on St. Peter and St. Paul church that took place in December 2016, killing 28 people and injuring more than 40. The pope said that the terrorist who attacked the church located near the main cathedral was brainwashed by misguided ideas and teachings.

The church blast came just two months after the state partially succeeded in containing a series of sectarian incidents that plagued Minya governorate. These incidents resulted in several deaths and injuries. In July 2016, the pope said the rate of sectarian violence is alarming, adding that there have been about 37 assaults on Copts since 2013.

11/11 was scheme to plunge Egypt into chaos: Al-Sisi