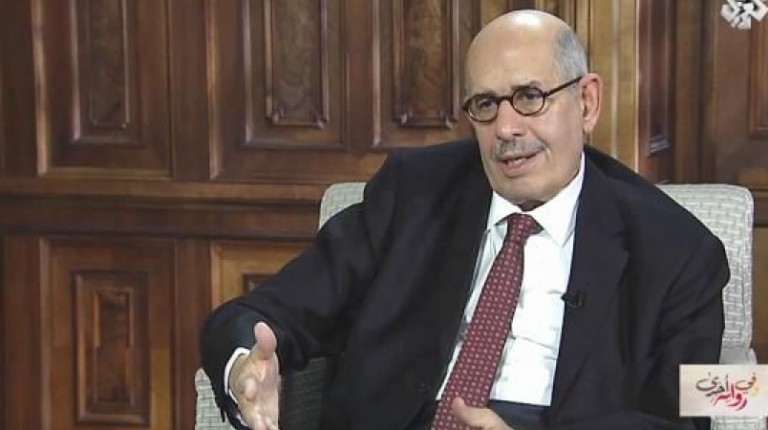 The leaks were broadcasted by TV host Ahmed Moussa, a known supporter of the current regime, on the privately-owned channel Sada Al-Balad. Most of the leaks were recorded during the 25 January Revolution and the period that followed.

According to the Egyptian Constitution, the violation of a citizen’s personal life—be it phone calls, emails, or any communication tools—should only be done by judicial order and for specific reasons and periods, which subsequently means that Moussa’s broadcast of the phone calls is unconstitutional; hence, unlawful.

In his call with Anan, ElBaradei said that he met with a group of youths who were calling for the dismissal of former president Hosni Mubarak-era figure Ahmed Shafiq who was the prime minister at the time of the recording, along with several other figures from his government. He said that he wasn’t particularly siding with them and believes that Shafiq’s government should be given a chance to properly perform.

During the majority of his phone calls, ElBaradei said that several figures were intending to establish their separate and independent political party. However, he said that this mentality and the absence of national consensus will bring back the 60-year dictator rule or will hand power to the Muslim Brotherhood.

ElBaradie in his leaked phone calls praised journalist Ibrahim Eissa and said that he is a good candidate for running his presidential campaign.

TV host Yosri Fouda said that, regardless of any stance on ElBaradei, his leaked phone calls include nothing criminal and only personal opinions. However, the real crime is violating personal calls and publicly airing them against laws and the Constitution.

Meanwhile, and following a three-year hiatus from any TV appearance or interviews, an interview with ElBaradei was aired on Saturday with the privately-owned Al-Araby channel. The leaks were released following the interview. Saturday’s episode was the first of five episodes, in which he is expected to disclose his views and opinions regarding the current status of the Middle East in general and Egypt in particular.

During the interview, ElBaradei said that the timing of his appearance in the scene is not deliberate, adding that he wasn’t completely absent from the scene over the past few years, but was displaying his ideas and opinions through Twitter. ElBaradei said that he chose to be involved again because the current events cannot be ignored, adding that he was criticised for using Twitter because several people prefer acts over knowledge and intellect.

ElBaradei further added that he stayed in Egypt for four years in an attempt to alter the dictator reality Egyptians were living. However, he chose to leave Egypt in 2013 on the off chance that the other points of view were right and his was wrong. “It, unfortunately, turned out that I was right,” he said.

The winner of the Nobel Prize for peace went on to say that the Arab world is destroying itself, and everyone should contribute with perspectives, knowledge, and vision. He said that Egypt is an automatic representative of the Arab world and vice versa.

The problem of the Arab world is that it depends on the policy of exclusion and persecution of the opponent, and Europe had to go through this phase about 300 years ago but moved on to find the right solutions.

The first episode with ElBaradei didn’t fundamentally focus on the current turmoil in Egypt, but rather on ElBaradei’s career and diplomatic life. The following episodes are set to delve more into the political life and challenges in Egypt and the Middle East.

In November 2016, ElBaradei issued a 13-point statement in which he clarified what happened during the ouster of former president Mohamed Morsi and his refusal of the violent dispersal of the Rabaa Al-Adaweyya sit-in from the very beginning. He said in the statement that he wasn’t only opposing the violent dispersal for moral reasons, but also due to the abundance of other peaceful solutions to the sit-in.

Following the sit-in’s dispersal, ElBaradei didn’t return to Egypt and has faced accusations from several political factions in Egypt. Some accused him of conspiring to oust Morsi, others said that he was supporting the violent dispersal of the sit-in.