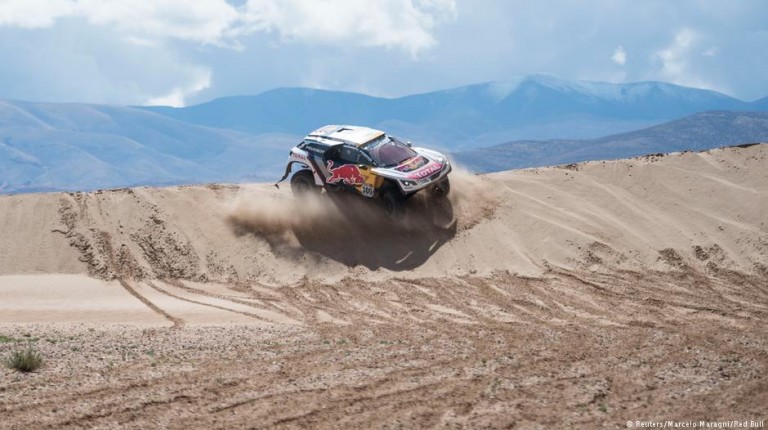 After Saturday’s sixth stage was cancelled, the Dakar Rally resumed in the Bolivian mud on Monday. Frenchman Stephane Peterhansel finished first, doubling his overall lead in the standings.Frenchman Stephane Peterhansel won Monday’s Dakar Rally special after narrowly edging Peugeot teammate and compatriot Sebastien Loeb in the first part of the rain-hit seventh stage between La Paz and Uyuni in Bolivia.

Reigning champion Peterhansel was just 48 seconds faster over the 161km route but almost doubled his overnight lead in the overall standings on Loeb, to 1min 57sec.

The 2009 champion, South Africa’s Giniel de Villiers, in his Toyota was third some 3mins 33sec behind Peterhansel over the special.

Bolivia’s stages in the gruelling 9,000km race have been badly affected by the weather with Friday’s run from Tupiza to Oruro shortened, Saturday’s stage cancelled and Monday’s run cut from 320km to 161km after more torrential rain.

Dakar 2017: Loeb wins stage 11 but Peterhansel has victory in sight