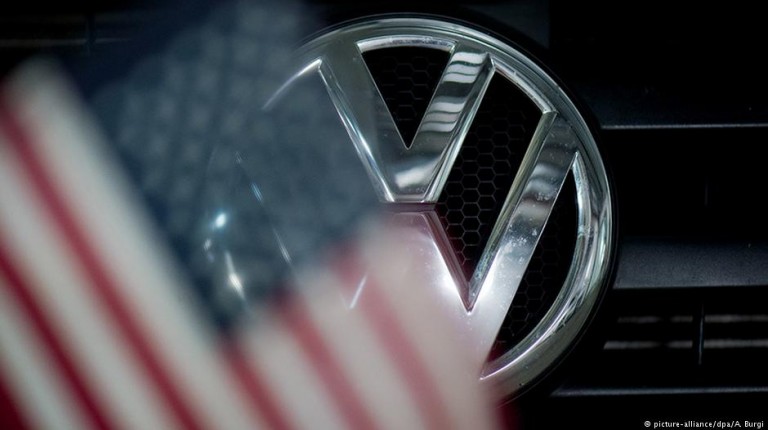 “The New York Times” has reported that Oliver Schmidt, a Volkswagen executive, has been arrested in the US. The newspaper said Schmidt was facing charges of conspiracy to defraud the United States.”The New York Times” reported Monday that FBI agents had arrested Volkswagen executive Oliver Schmidt on conspiracy charges related to the German carmaker’s large-scale emissions-cheating scandal. The newspaper cited two unnamed sources with knowledge of the arrest.

Schmidt led Volkswagen’s US regulatory compliance office from 2014 to March 2015. According to the report, lawsuits filed against the automaker by the states of New York and Massachusetts accused Schmidt of playing a key role in Volkswagen’s efforts to conceal its emissions-cheating devices from US regulators.

“The New York Times” said Schmidt was expected to be arraigned on Monday in Detroit.

The head of the Volkswagen brand of cars, Herbert Diess, was asked ahead of the Detroit Auto Show about VW engineers reportedly going to jail for their role in the affair, and about executives fearful they could be arrested, if they traveled to the US.

Reacting to Donald Trump’s recent broadsides against various carmakers producing vehicles in Mexico, Diess said in Detroit Volkswagen would continue to manufacture in Mexico as it was “a very important market for the company.”

Diess said Volkswagen would keep its production facility in Puebla, Mexico, where it produced the Jetta and the Gold MK7.

At the same time, Diess emphasized that the German carmaker had a significant presence in the US. “I think we’re well positioned in the US; we strongly invested in Chattanooga and we have one of the most modern plants there.”

He also noted that his company would decide in early 2018 where in the US to manufacture Volkswagen electric cars.

Profit boost sets VW on the road toward the future