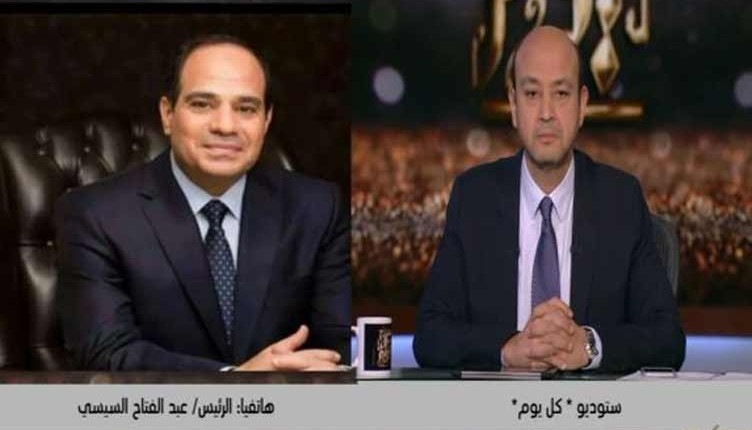 President Abdel Fattah Al-Sisi claimed on Monday evening that Egypt is currently in the grip of a real war against terrorism in North Sinai, similar to the war against Israel in 1967.

He noted during a phone interview with renowned television anchor Amr Adib through the privately run channel ONTV that the Egyptian state is paying great attention to the presence of civilians in its war against terrorism in North Sinai.

He added that the scope of military operations that took place during the six-day war with Israel before the signing of the ceasefire agreement is similar to the terrorist operations that have been taking place against Egypt over the past three years.

“In 2013, I asked Egyptians for authorisation to face the terrorism that is presenting a challenge to the nation and which will continue being a challenge, not only for a day or a week, but for years to come,” Al-Sisi said. “It will carry a heavy cost, not only financially, but primarily in the form of the lives of the sons of Egypt.”

Al-Sisi further explained the situation in North Sinai following the two attacks that hit the city of Al-Arish on Monday which left nine people dead, eight of which were police officers. He explained that there are schemes and financial support offered to terrorists in Egypt from countries and organisations that he called “evil people.”

“Over the past three months alone, millions of US dollars and Egyptian pounds were seized, in addition to 1,000 tonnes of explosives and a massive number of stored explosives that had been destroyed beneath the ground in Sinai,” he said.

He noted it possible that the state could violently react to each village that harbours terrorists; however, these violent reactions would lead to the injury and murder of civilians, adding that the state is trying to eliminate terrorism in the North Sinai cities of Al-Arish, Rafah, and Sheikh Zuweid without causing any harm to civilians.

“The state is always keen to keep civilians and innocent people away from such confrontations with terrorists,” the president noted.

He also referred to the financial cost of the ongoing war on terrorism over the past three years. He explained that there are 41 army battalions in the Sinai Peninsula, with 25,000-30,000 conscripts, which require huge amounts of resources to meet daily and essential needs.

“The new US administration has its apparatuses that are monitoring what is being done by Egypt in its war against terrorism, which it carries out on behalf of the entire world,” he said.

In response to a question by Adib regarding the failure of the 11/11 call to a new revolution, Al-Sisi noted that the main goal of 11/11 protest calls was to plunge Egypt into a state of chaos.

“The number of terrorist operations that have been foiled in the preceding month to 11/11 was 53,” Al-Sisi claimed. “All entities moved, whether intentionally or unintentionally, to topple the state and plunge Egypt into chaos.”

”Yes the goal was to destroy the state, not to topple me as I am not a regime,” Al-Sisi said. “I have been elected by Egyptians to lead this period, not as a regime that seeks to establish itself permanently and all Egyptians are aware of that.”

In the same context, Al-Sisi met on Monday with head of Britain’s secret intelligence service Alex Younger. The meeting was held in the presence of the head of the Egyptian Intelligence Khaled Fawzy, according to a presidential statement.

Citing Younger, the presidency’s official spokesperson Alaa Youssef said that the former considers Egypt a main pillar for peace and stability in the Middle East. Younger added that fostering security cooperation between the UK and Egypt will be strategic due to the turmoil that the Middle East is experiencing, and the high rate of terrorist attacks around the world.

On the other hand, Al-Sisi said that Egypt is looking forward to enhancing ties with the UK particularly because of the wave of terrorism that has swept the Middle East and the world. The Egyptian president further added that there should be an inclusive vision to combat terrorism and fight its roots without differentiating between terrorist groups.