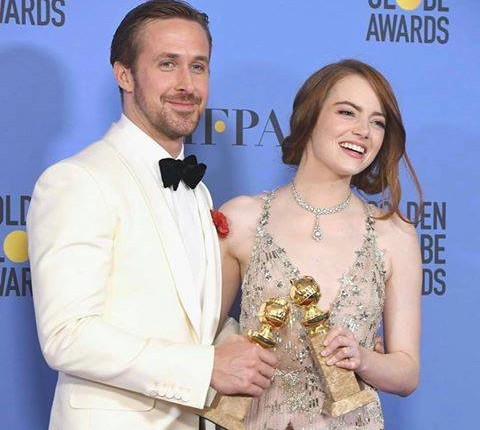 For decades, the Golden Globes has been one of the most important artistic events that millions of people look forward to every year. The reputable ceremony that takes place at the Beverly Hills Hilton in Los Angeles attracts the brightest stars in Hollywood and the international cinema industry. The Golden Globes 2017 witnessed an overdose of political criticism and a new record of awards.

Jimmy Fallon, the American comedian who hosted the night, opened the show with a hilarious pre-recorded musical performance inspired by the first scene of La La Land in which Nicole Kidman, Amy Adams, Ramy Malek, and many others sang with Fallon. In his opening monologue, he encountered an embarrassing situation when his teleprompter failed and he started improvising.

“I can think of something. You know what, I’ll make up this monologue,” he said.

When the teleprompter was fixed, he went back to the scheduled script in which he criticised Trump, comparing him to one of the worst characters in the famous TV show Game of Thrones.

“Game of Thrones has so many plot twists and shocking twists, a lot of people have wondered what it would’ve been like if King Joffrey had lived. Well, in 12 days, we’re going to find out,” he said.

La La land, a movie that blends comedy, romance, music, and drama, swept the festival awards and won all seven categories which it was nominated for. The movie tells the story of a jazz musician and a talented actress who fall in love and struggle to follow their big dreams.

Two of the awards went to Damien Chazelle who was nominated for Best Screen Play and Best Director. The movie also won the Best Motion Picture for a musical or comedy. Emma Stone and Ryan Gosling won the awards of best actor and actress in a musical or comedy and Justin Hurwitz won two awards for original score and best original song City of Stars, which was the iconic theme of the two main characters in the movie.

Hugh Laurie, known for his master role in the TV series House, won the award for Best Performance by an actor in a supporting role for his series the Night Manager. During his acceptance speech, he cleverly mocked American president-elect Donald Trump by saying: “I accept this award on behalf of psychopathic billionaires everywhere.”

Similarly, Meryl Streep, who gave one of the most emotional speeches of the night, attacked Trump for imitating a disabled reporter during his presidential campaign.

“There was one performance this year that stunned me. It sank its hooks in my heart. Not because it was good. It was that moment when the person asking to sit in the most respected seat in our country imitated a disabled reporter,” she said during the acceptance speech she gave for her award.

For his outstanding role in Manchester by the Sea, Casey Affleck won Best Performance by an actor in a motion picture for the drama genre, while Moonlight won the Best Motion Picture award for a drama film. The movie tackles the life of a young black man from childhood to adulthood highlighting his life struggles while he grows up in a rough neighbourhood of Miami.

Moreover, the Best TV Series award went to the British drama The Crown in which the early reign of Queen Elizabeth II of the United Kingdom was portrayed. Zootopia won the Best Motion Picture award while the French movie Elle, starring Isabelle Huppert, was chosen for the Best Motion Picture in the foreign language movies category. The movie tells the story of a French businessperson who was raped in her home and her struggle to identify the man who raped her.

The night ended with the attendees moving to the press room where journalists got to ask questions.