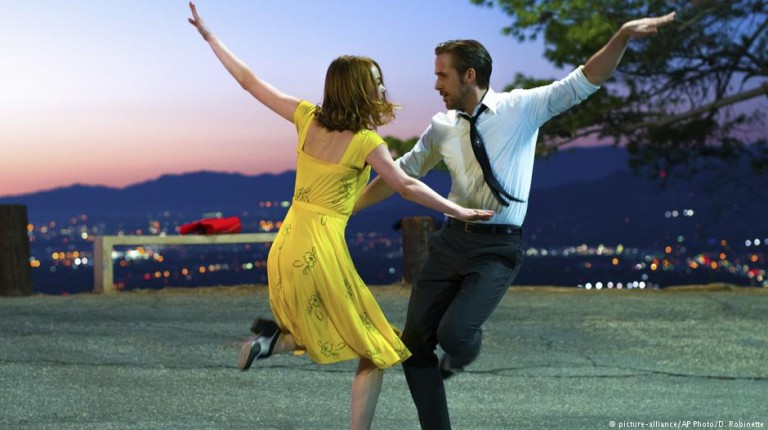 After its Golden Globe success, the musical starring Ryan Gosling and Emma Stone pursues its glorious dance into award season with 11 BAFTA nominations. Germany is also on the list.The British Academy Film Awards (known as the BAFTAs) revealed its nominations on Tuesday.

Less famous than its American counterpart, the Oscars, the BAFTAs nevertheless listed many features produced in the US as best film. The award recognizes the year’s most outstanding British films in a separate category.

A day after sweeping a record number of Golden Globe Awards, the musical “La La Land” leads the BAFTA race, with nominations in 11 categories, including nods to directors Damien Chazelle and leading actors Ryan Gosling and Emma Stone.

“Arrival,” by Denis Villeneuve and starring Amy Adams, as well as Tom Ford’s “Nocturnal Animals,” with Jake Gyllenhaal in the lead role, follow with nine nominations each. “Manchester by the Sea” obtained six nods, among which for director Kenneth Lonergan and lead actor Casey Affleck.

The Palme d’Or-winning film “I, Daniel Blake,” by British director Ken Loach, received five nominations, as did “Fantastic Beasts and Where to Find Them,” “Hacksaw Ridge,” and “Lion.” “Moonlight,” which just obtained best drama at the Golden Globes, is also contending for BAFTA’s best film award and was nominated four times.

After grabbing the world’s attention with her anti-Trump speech at the Globes, Meryl Streep is once again among the nominees for best actress, for her role in “Florence Foster Jenkins.” The film received four nods.

In the category “Film Not in the English Language” is the acclaimed German film “Toni Erdmann,” directed by Maren Ade. The Hungarian drama set in the Auschwitz concentration camp, “Son of Saul” by László Nemes, is also on the list, along with Pedro Almodovar’s “Julieta,” the Turkish-language film “Mustang,” and “Dheepan,” which is set during the Sri Lankan Civil War.

The British Academy Film Awards ceremony will be held at the Royal Albert Hall in London on Sunday, February 12 – two weeks before the Oscars. The ceremony will be hosted by Stephen Fry and will be broadcast by the BBC.