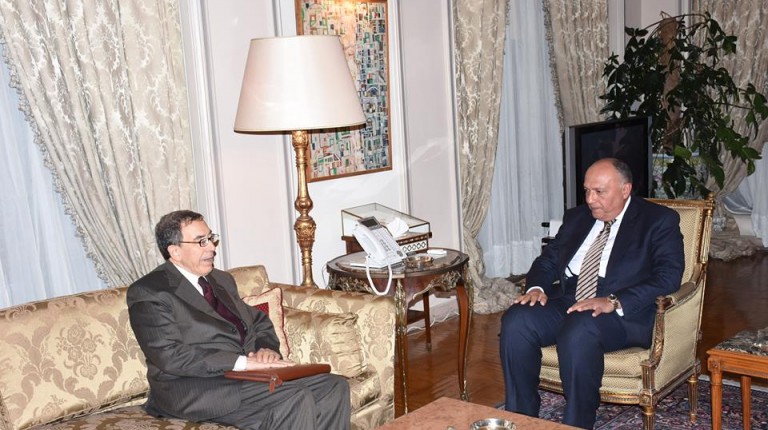 Egypt’s Foreign Minister Sameh Shoukry said on Tuesday that countries in geographic proximity with Libya should find solutions to maintain the sovereignty of Libya and the independence of its institutions.

In a statement issued by the Foreign Ministry, the official spokesperson said that Shoukry met with the Arab League envoy to Libya ambassador Salah El-Din Al-Jamaly. Shoukry stressed during the meeting the importance of activating the Skhirat agreement that was signed in 2015 and backed by the United Nations, and added that there should be continuous coordination with the Arab League regarding the Libyan political turmoil.

El-Jamaly praised Egypt’s role in attempting to trigger talks between different political factions in Libya. He also discussed the results of his latest calls on political parties in Libya and suggested solutions to end the conflict, including the obstacles that may bar these solutions from being implemented.

The spokesperson said that both sides agreed on the importance of reaching a solution to the Libyan turmoil by Libyan factions and entities without foreign intervention.

Egypt has hosted several meetings of Libyan members of parliament and political figures over the past few months in an attempt to reach a political solution. The turmoil in Libya had started after the downfall of former Libyan president Muammar Ghaddafi. The country is divided into several political factions and militants have taken over several parts in Libya.

The Skhirat agreement was signed in 2015 to seek an exit to the Libyan turmoil; however, several factions haven’t adhered to its terms and the turmoil is still ongoing.

Shoukry discusses the Middle East and terrorism in UN meeting