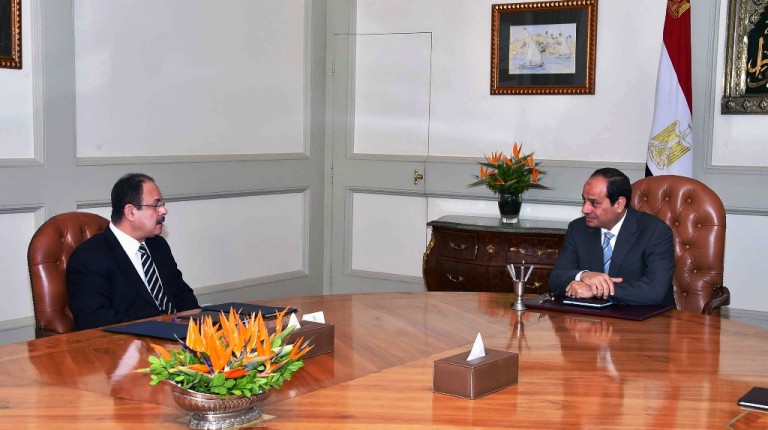 President Abdel Fattah Al-Sisi held on Wednesday a meeting with Defence Minister Sedki Sobhi and Interior Minister Magdy Abdel Ghaffar, in addition to number of leading officials in the army and Interior Ministry to discuss the security situation in North Sinai, according to presidency statement.

The statement said that the meeting discussed the security situation all over Egypt, but focused more on the situation in North Sinai which recently witnessed two deadly attacks against security checkpoints in Al-Arish.

Presidency spokesperson Alaa Youssef noted that Al-Sisi asked for full coordination between the armed forces and police to counter terrorism, asserting the necessity of vigilance and readiness to fight in order to foil terrorist attacks.

Meanwhile, Al-Sisi stressed that the safety of civilians should be a priority during the running sweeping operations carried out against the terrorists’ stationing points.

On the ground, 10 anonymous militants have reportedly been killed on Wednesday, following an attempted attack that targeted an army checkpoint in the North Sinai city of Sheikh Zuwaid, a North Sinai based journalist told Daily News Egypt on condition of anonymity.

“Anonymous militants had launched an attack on an army checkpoint located in the area of Nagd in the city of Sheikh Zuwaid. Forces managed to curb the attack and killed 10 militants,” he added.

On Monday, two deadly attacks were launched by members of the Islamic State (IS)-affiliated group “Sinai Province” against two security checkpoints in the city of Al-Arish. The attacks took place in a residential area and in front of residents, according to testimonies from the locals.

The Interior Ministry issued a statement following the attacks through which it clarified that eight security personnel and a civilian were killed due to the attacks. It further said that it killed five attackers and managed to curb the attack.

However, “Sinai Province” published on Wednesday photos of the attacks for which it declared responsibility. The photos showed a number of the group’s militants while shooting security conscripts and controlling an alleged security facility.

In the same context, the armed forces’ media office released a statement on Wednesday that entails the prominent achievements of the border guard forces from November 2016 until January 2017. The statement highlighted efforts exerted to eliminate terrorist stationing points.

According to the statement, the border guard forces managed to eliminate a number of militant stationing points during missions to secure the borders through the cooperation with other army branches.

It further explained that the border guard forces managed to destroy 67 tunnels and fuel stores that have been effectively used in the fabrication of improvised explosive devices (IEDs. Moreover, forces managed to seize 1,738 weapons, 12,879 different bullets types, and 380 kg of explosives.

The statement also said that in the terms of seizing drugs, assigned forces from the border guard forces managed to seize drugs estimated to be worth EGP 1.8bn, and that they also managed to prevent 12,192 people of different nationalities from illegally immigrating from Egypt to other countries via the sea.