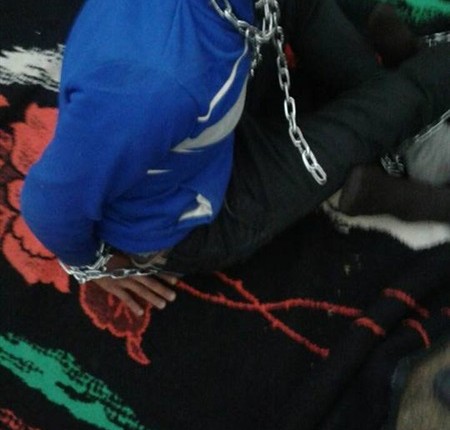 Numerous photos circulated through several social media outlets in Egypt, allegedly showing a number of young Egyptians being bound in chains with apparent torture marks on their backs. The photos sparked massive outrage as those youth are believed to have been kidnapped in Libya.

Hamada Salah, the brother of one of the young men who appeared in the photos, spoke to Daily News Egypt on Wednesday and asserted that his brother Mohamed Salah had been kidnapped by anonymous militants after illegally travelling to Libya in December.

He said that a smuggler had agreed to smuggle his brother into Libya so that he could find employment in agriculture. He explained that his brother is a farmer.

“We were in constant contact with Mohamed from the beginning of his trip to the Egyptian-Libyan border,” Hamada explained. “My brother told us that his cell phone will be turned off when he crossed the border. We lost contact with him for 15 days after that.”

During this time, Hamada said he was in constant contact with one of the smugglers who kept him updated on his brother’s status. “The smuggler regularly updated me with news of my brother,” he said. “He told me that my brother had found work and had managed to establish himself; however, on 5 January I received a phone call from my brother directly saying he had been kidnapped.”

The alleged kidnapped Egyptian worker asked Hamada to pay a EGP 70,000 ransom. “He urged me to collect the money and pay it as soon as possible because he and other Egyptians were subject to unbearable torture by their captors.”

Consequently, Hamada reached out for help from the Interior Ministry, which told him that it is difficult to reach the kidnappers as they are not inside Egypt. Moreover, he contacted the Foreign Ministry; however, they asserted they could not do anything as Egypt does not have diplomatic representation in Libya.

On Saturday, the kidnappers threatened to kill Hamada’s brother unless he paid the ransom. They also sent him photographs of his brother and the other kidnapped Egyptians.

Some of the smugglers have told Hamada that a group named “Ansar El-Sharia” (Supporters of the Sharia) is behind his brother’s kidnapping. They told him that the group is an Islamic militia; however, they are not related to Islamic State (IS).

The photos showed four half naked men sleeping on the ground bearing signs of beatings and torture on their backs.

Daily News Egypt made several attempts to contact the Ministry of Foreign Affairs; however, they could not be reached by the time of print.