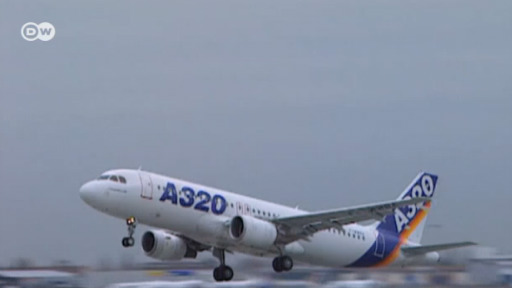 European plane maker Airbus has logged a new delivery record for its commercial aircraft segment – not enough, though, to beat US rival Boeing. Airbus said it stood ready to ramp up its production in the future.Airbus announced Wednesday it delivered a record 688 commercial planes to customers around the globe in 2016.

The company said the figure marked an 8-percent increase year on year and came on the back of strong operational performance and a robust market. Airbus thus booked the 14th straight year of rising delivery numbers.

The Toulouse-based European plane maker added the aircraft were supplied to 82 clients worldwide.

Orders in 2016 outstripped those of its main rival in the US, with a total of 731 logged last year, 63 more than Boeing recorded. By contrast, Boeing came out on top of the deliveries table with a total of 748 planes supplied to customers in 2016.

“We delivered on our objectives in a challenging environment, proving our ramp-up readiness for the future,” Airbus President Fabrice Bregier said in a statement.

He also noted that Airbus was delivering an A321 to Iran Air, the first of 100 planes the company would send to Iran under a deal to modernize Iran’s aging fleet. The contract had become possible after a 2015 international accord with Tehran on its nuclear program that saw many sanctions against the country lifted.

Iran has also ordered planes from Boeing in a bid to diversify its base of suppliers and get the best deals from both sides.