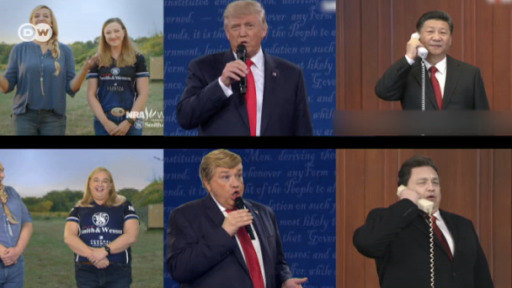 Whimsical but real TV programs and YouTube vidoes are an inspiration for German comedian Oliver Kalkofe. For DW, he has tackled international topics and parodied Donald Trump and Chinese President Xi Jinping.The National Rifle Association in the US launched a video channel specially designed for women. The series “Love at First Shot” caters to inexperienced women with a passion for weapons.

In his version of the original NRA show for women, which can be viewed here, the comedian parodies NRA host Natalie Foster, as well as amateur markswoman and arms trainer Julie Golob.

Donald Trump and women is the second topic Kalkofe tackles in his “Media Meltdown.” As Donald Trump is inaugurated as president of the United States, the comedian puts his own spin on a viral interview with Trump about his cabinet picks. DW will release Kalkhofe’s second video on Euromaxx’s Facebook page video on Monday.

In addition, Oliver Kalkofe gets a telephone call from space. China’s national television broadcaster CCTV presented the conversation between President Xi Jinping and the astronauts Jing Haipeng and Chen Dong who were on board the spaceship “Tiangong-2” (Heavenly Palace 2). During the interview, they raved about the clear video transmission of the 6th full assembly of the 18th central committee of the Chinese Communist Party.

Comedian Oliver Kalkofe got involved in the conversation for his series, “Kalkofe’s Media Meltdown,” which can be viewed on Euromaxx’s Facebook page on Tuesday.

Kalkofe makes his job easier by choosing material from PR videos, well known TV shows or teleshopping broadcasts that border on satire in the original. But that, of course, doesn’t stop Kalkofe from adding insult to injury. He often plays several roles at once while continuing with the clips. His costumes and props are so elaborate that he comes dangerously close to the original.

For DW, Kalkofe has now also picked up some international productions that he parodies in English.

“Germany is the world’s export champion in some fields. When it comes to humor, we haven’t produced that much so far. I’m proud to make a modest contribution to German satire and humor,” says the 52-year-old comedian.

After being trained as a foreign language correspondence and studying journalism, German and English philology, Oliver Kalkhofe, who was born in Hannover, worked for many years as a comedian at radio stations. His dark humor and sense of sarcasm became his trademarks.