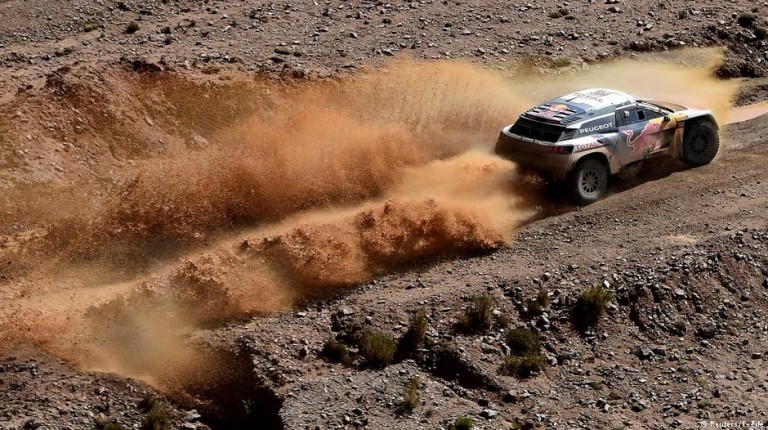 Peugeot completed another 1-2-3 finish in stage 10. Stephane Peterhansel, who initially came third after a crash that left a motorcyclist with a broken leg, was later given the win and takes the lead from Sebastien Loeb.After a tricky start, Loeb finished Thursday’s race stage 2 min 33 sec ahead of teammate Cyril Despres and nearly seven minutes ahead of Peterhansel, who stopped for some time to assist motorbike rider Simon Marcic after colliding with the Slovenian.

The accident occurred 83km into the special stage from Chilecito to San Juan in Argentina, leaving Marcic with an open left leg fracture.

But several hours after the finish, race organizers announced that Peterhansel had benefitted from a rule that allowed him to claim lost time for the stoppage. The ruling took the 2016 champion from 6mins 45secs behind Loeb to 7mins 28secs in front and puts him in the overall lead.

In what now looks to be a two horse race, Loeb started 1 min 38sec clear of Peterhansel in the overall standings but is now 5mins 50secs behind with just two stages remaining

Stage 10 was Peugeot’s third podium clean sweep and the three drivers who dominated on Thursday are the same three who look set to finish in the top three places. Despres in third is almost an hour clear of Toyota’s Nani Roma.