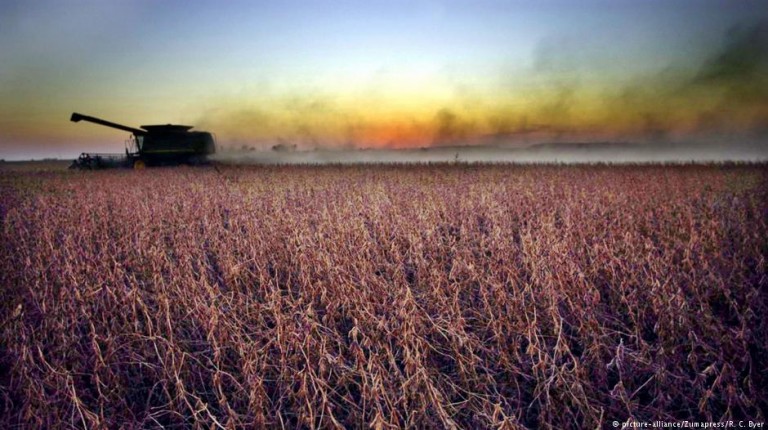 Ever more power over food production is concentrated in the hands of ever fewer massive multinationals – with grave implications for food security and the environment.Not just biological and agricultural diversity are under threat from industrial farming: A recent report highlights the rapidly disappearing diversity of players in the food industry.

According to the Corporation Atlas – released by the Heinrich-Böll and Rosa-Luxemburg foundations, Friends of the Earth Germany, Germanwatch, Oxfam and Le Monde Diplomatique – businesses throughout the entire food and agriculture food chain have been consolidating to immense proportions.

In the global agriculture sector, there have long been seven international manufacturers of pesticides and seeds, the report says. But that’s changing.

Once German chemicals company Bayer completes its planned takeover of seed company Monsanto, that will make it the world’s biggest agrochemical producer.

Meanwhile, US giants DuPont and Dow Chemicals are also planning a merger, and ChemChina wants to buy Swiss agrochemical and seed company Syngenta.

“Soon, we won’t be dealing with an oligopoly, but three huge monopolies,” Barbara Unmüßig of the Heinrich-Böll foundation told DW.

There is already very little competition in the seed and pesticide sector. Where there were once seven, there will soon be only four – three of which will control more than 60 percent of the market for commercial seeds and agrochemicals. Nearly all of these companies deal in genetically modified plants.

“If you have seeds from a few companies, then you have all the same plants,” says Kathrin Wenz, agriculture policy expert at Friends of the Earth Germany.

Less diversity in what farmers plant impacts wider biodiversity, with monocultures supporting fewer other plants and animals in the surrounding ecosystem.

Fewer varieties of crops can also threaten food security. Normally, if one variety is wiped out by disease, others may survive. But farmers around the world are increasingly planting the same industrially produced seeds.

Traditionally, seeds from different locations are better adapted to local conditions. With an increasingly unstable climate, this becomes even more important.

“In order to insure food security, you need high agro-diversity so that climate change, floods and other weather impacts don’t have such a strong effect on the farming system,” Wenz said.

In other words, greater biodiversity means farmers won’t lose everything in their fields when extreme weather hits.

Despite food industry claims of fighting world hunger by increasing production, the current trend in farming practices tends to actually promote depletion of agricultural land in the long term.

“We are destroying the fertility of the soil with the overuse of chemical fertilizers and monocultures,” explains Unmüßig. “We lose 24 billion tons of fertile soil every year, which could be used to build up food security.”

With fewer companies, farmers become more dependent on the remaining giants. The report points out that those in developing countries are most vulnerable to negative effects of this concentration.

Governments also play a key role – and they can be pressured. “The more market power that is bundled together, the more politicians are susceptible to industry pressure,” says Unmüßig.

A spokesperson for Bayer declined to comment on the topic. But ecologists fear environmental standards are one area in which governments easily come under industry pressure.

Meanwhile, chemicals companies are not the only ones consolidating – businesses along the entire food chain are quickly becoming fewer and more powerful.

When it comes to some of the biggest raw materials in the industry – wheat, maize and soya – four major companies rule, according to the report: Archer Daniels Midland, Bunge, and Cargill – all US-based multinationals – and the Dutch Louis Dreyfous Company.

They can play their enormous negotiating power against producers – as could supermarkets. “The supermarket chains play the role of gatekeeper, deciding how food is produced and what fills the shelves,” Oxfam’s Marita Wiggerthale told DW.

The report says that as well as pushing small, independent business out of the market – particularly in middle-income countries like India, Indonesia and Nigeria – the power of supermarket chains also allows them to dictate prices and conditions to suppliers, pushing down wages and lengthening working hours.

Overall, the industry is heading in the direction of ever-more intensive and environmentally unsound farming practice, Wenz says, while small-scale farmers are being pushed out of the market.

The report advocates alternatives based on agricultural ecology, natural fertilizers and pest control, and local seed use.

And it suggests action that consumers can take, such as getting involved in community-supported agriculture projects.

But with the rapid reduction in consumer choice, the report’s authors are also calling on governments to take action by strengthening antitrust and competition legislation.

“We want politics to be aware to the concentration of power consolidation in this branch, which makes us dependent on the decisions of large corporations,” concluded Unmüßig.