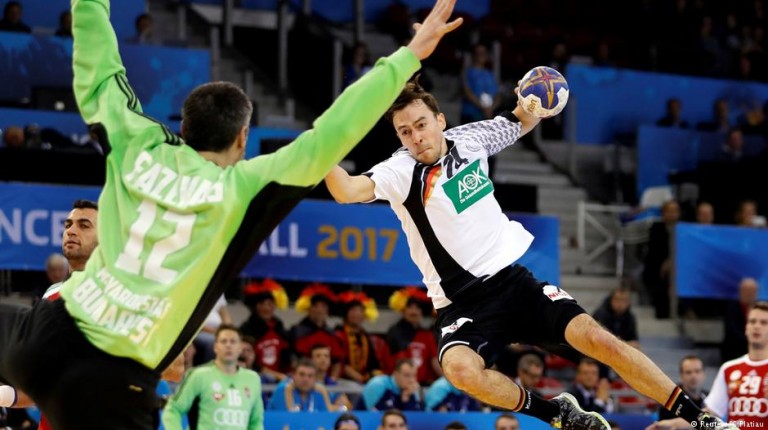 After appearing to have their World Championship opener sewn up in the first half, Germany nearly succumbed to a strong Hungarian comeback on Friday. But Dagur Sigurdsson’s side held on to claim a 27- 23 win.Sigurdsson, who will leave the European champions to coach Japan after the tournament, looked increasingly agitated as the Hungarians scored five without reply either side of the halftime break in Rouen but wore an expression of relief at the final whistle.

Things were very different at the start of the game. Germany took the lead early on and managed to keep the Hugarians at arm’s length in the opening exchanges before accelerating away towards the end of the half with a pair of penalties and some enterprising attacking play.

Germany were successful with 67% of their first half attacks and captain Uwe Gensheimer, who was thought likely to miss the match after the death of his father, led the way with seven goals. He finished with 13 and was awarded man of the match.

Despite sitting just seven places below the first-placed Germans in the international rankings, Hungary struggled to make any real headway against their opponents in the opening period until two late goals cut the halftime deficit to five (16-11) and kept the Hungarians alive in the game.

The Hungarians took full advantage of that momentum in the second period, an early strike reducing Germany’s lead still further. Hungary looked increasingly solid in defense but a missed Gabor Csaszar penalty and the German crossbar looked to have prevented them from taking further advantage of their new found ascendancy.

But the comeback continued, a rapidfire treble bringing Hungary to within a point until Germany finally notched their first strike for nine minutes in the 38th minute of the game.

Iranian-born left back Iman Jamali increasingly started to impose himself on the game for Hungary as Germany’s play became disjointed. But a foul, and subsequent two minute ejection from the game for Timuzsin Schuch, saw them regain a measure of control.

But it didn’t last, with the game continuing to see-saw until the closing minutes when Germany’s increased composure in front of goal allowed them to pull away and claim a victory significantly less comfortable than the scoreline might suggest.

The result means Germany are level with Chile and Croatia with two points in Group C. Germany face Chile on Sunday.