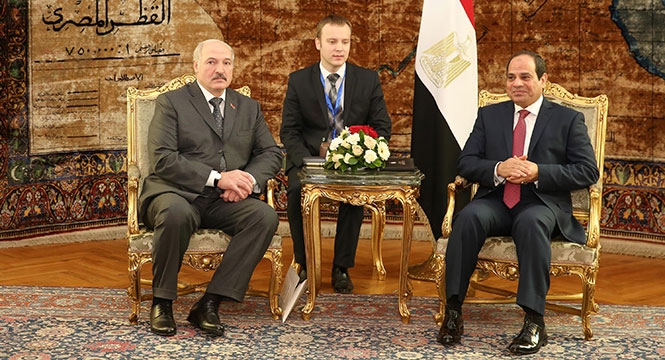 On the occasion of the passage of 25 years since the establishment of diplomatic relations between the two countries, Belarus president Alexander Lukashenko arrived in Egypt on Sunday in an official two-day visit, state-run Akhbar Al-Youm newspaper reported.

The first day of the visit, Lukashenko is expected to meet with President Abdel Fattah Al-Sisi. Negotiations with restricted attendance will be followed by expanded participation talks. A number of bilateral documents to advance the Belarus-Egypt cooperation in various spheres are expected to be signed as a result of the talks. On 16 January, the Belarusian head of state is expected to meet with Egyptian Prime Minister Sherif Ismail and take part in a Belarusian-Egyptian business forum.

The bilateral relations between Egypt and Belarus have been witnessing rapid development. The commercial exchange between the two countries reached $186.3m in 2015.

Al-Sisi and Lukashenko are also opening the second Egyptian-Belarusian Business Forum and its second exhibition on Monday morning, in the presence of 10 Belarusian ministers, their Egyptian counterparts and more than 40 companies.

Ahmed Al-Wakil, head of the Federation of Egyptian Chambers of Commerce (FEDCOC), said that the goal of the forum is to ensure a partnership in heavy industries, which includes tractors, towing implements, agricultural harvesting equipment, as well as lorries and buses, feeding industries for tractors, lorries, and tires, quarries, and mining equipment.

“The state is trying to create a new and attractive business climate and environment through a package of new legislations related to investment and private economic zones, employment, tax, customs, and commercial registration laws,” El-Wakil said.

El-Wakil stressed the need to pass clear structural incentives, as well as activating the role of the private sector, as it accounts for 75% of the national GDP, in addition to activating anti-monopolistic practices and consumer protection laws. He added that the Constitution allows the implementation of free market economics to stimulate investment and protect competition.

Secretary general of FEDCOC, Alaa Ezz, said that the forum will see presentations on new legislation and procedures, as well as details on major projects, including the Suez Canal Economic Zone, the 1.5m feddans reclamation project, and the New Administrative Capital.

He added that there will also be presentations on investment opportunities across different sectors, including land, railway, air, and marine transport, as well as logistics, storage, new and traditional energy, tourism, real estate development, infrastructure, industry, and trade.
Through the forum, Egypt aims to promote itself in order to recover its global investment position.