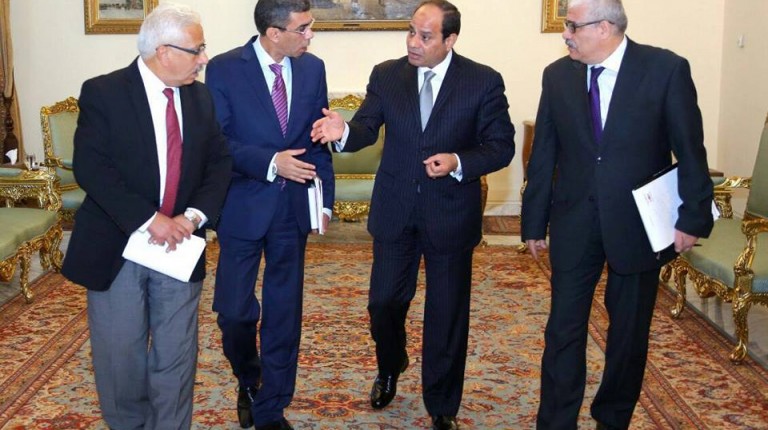 President Abdel Fattah Al-Sisi said that the compounding economic difficulties in Egypt made it necessary for the government to take measures, such as the flotation of the Egyptian pound.

In the first part of his meeting with editors-in-chief of national newspapers, the president said that the government is taking measures to lower the price of the US dollar against the Egyptian pound to bring commodity prices down.

He explained that controlling prices requires pumping goods to increase supply, stressing that this requires parallel mechanisms to serve as an insulator between the free market and the suffering of people.

Since the flotation on 3 November 2016, banks have been free to set the prices of foreign currency against the Egyptian pound.

Before the exchange rate began to slightly decline, the price at banks approached EGP 20.

Al-Sisi explained that he is considering establishing a body to buy pharmaceutical raw materials, noting that a huge medicine factory will be opened on 30 June to provide alternatives to imported medications, including insulin.

He added that another factory will produce baby formula within six months.

Moreover, he pointed out that the cornerstone of the New Administrative Capital will be set in weeks.

The president said that the 1.5m feddans reclamation project has been presented to individuals and investors, noting that the government is ready to deliver 100,000 feddans.

Speaking about commodity prices, Al-Sisi said that current prices need to be controlled, noting that the government is working to establish parallel mechanisms to help citizens avoid suffering caused by a free market.

“Current ongoing procedures are crucial for the treatment,” he stressed.

“During the changes in the 1950s and 1960s, was there not any problem in the market mechanisms?” he asked. “But when the system changed and prioritised profit, there were repercussions which accumulated over time,” he answered.

He noted that the current value of the pound is not fair, expecting fair value to be reached within six months. “Once the pound value appreciates, prices will be impacted,” he stressed.

According to statistics, basic inflation has jumped in the fourth quarter of 2016, reaching its highest level in seven years.

Al-Sisi explained that these mechanisms will not bring back socialism, but rather serve as a buffer between the free market and the struggle of Egyptians.

“We will face greed with the law, not exceptions,” he stressed. He warned greedy traders saying that he will not leave the people prisoners to the free market mechanisms.

Furthermore, he explained that projects set up by the armed forces are funded by its own resources without burdening the state budget, noting that they aim to maintain national dignity by establishing major projects for the Egyptian people.

“The army built its economic ability over many years,” he said. “Officers and soldiers eat gravel to save the army the suffering of 1967 without burdening the national economy,” he claimed.

He stressed that over three and a half years, the armed forces did not rely on the state budget to purchase arms, but rather relied on its own resources.