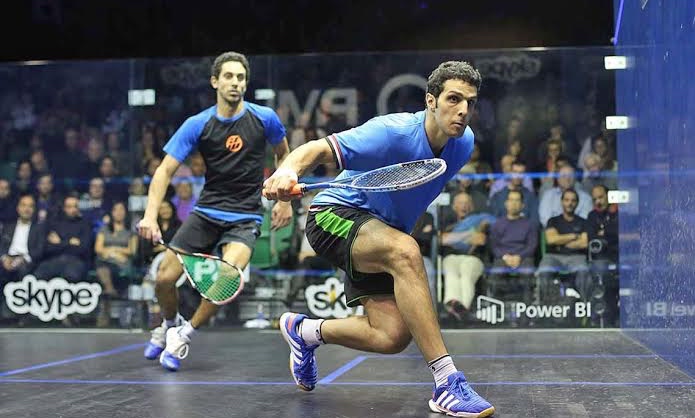 Four Egyptians qualified to the quarterfinals of the J.P. Morgan Tournament of Champions in New York, United States, which concluded its second round.

The second round started on 14 January and ended on 15 January.

Although South Africa’s Stephen Coppinger started the match by winning the first game 11-4, Egypt’s Marwan El-Shorbagy turned the table by winning the following three games by 11-2, 11-8, 11-7. Thus, the match ended 3-1 in Marwan’s favour.

In this regard, Mosaad stated after his first match at the tournament: “Every time I get on court, I just try to make the most of it. I just want to be satisfied with my game, whether I win or lose.”

Tarek Momen was delighted with the 3/0 victory: I’m over the moon with my performance”, he said after his match. “Literally Omar and I have been competing since we are 8 years old. For the past 20 years, there has never been more than an inch between us!  So for me, getting a 3/0 victory against him today is just unbelievable.”

Having beaten the Frenchman in Hong Kong, Egypt’s Fares Dessouky arrived full of confidence against Gregory Gaultier, winning the first two games with scores of 11-9 and 11-8, respectively. However, Gaultier did not surrender, and managed to take his revenge, winning the following three games by 11-3, 11-7, and 11-7, respectively. Hence, the match ended 3-2 in Gaultier’s favour.

The battle between England’s Nick Matthew and his fellow countryman James Willstrop, ended with Willstrop being victorious, as he won by 3-2 (11-6/7-11/5-11/11-7/11-4). It was an extraordinary moment for James, as it was the first time in 10 years and 19 matches he managed to beat his compatriot.

Thus, Willstrop is the only player representing England in the quarterfinals.

For Farag to participate in the tournament was a great achievement, as he had a hernia surgery in November.

In this regard Abdel Gawad expressed that “Cameron Pilley doesn’t need an introduction. He is one of the most experienced players on tour. He started playing on tour before me. This was the fourth time I played against him, and each time, the matches went up to five games. I was expecting a very tough match today. My coach had given me different strategies, and finally one of them worked.”

Pilley said on his Twitter account: “Went down 11-9 in the fifth against Gawad. Overall happy with how I’ve played this week, just a bummer not to get the win today!”

The quarterfinals are taking place on 16 and 17 January.

Mohamed will play against his younger brother Marwan. Mohamed was the tournament’s champion for the past two consecutive years in 2015 and 2016. However this year, he cannot guarantee his win in the presence of Abdel Gawad, who beat Mohamed in more than one remarkable occasion at the end of 2016.

In the other three quarterfinals, Momen will play against Gaultier; Willstrop against Coll; and Abdel Gawad against Rösner.