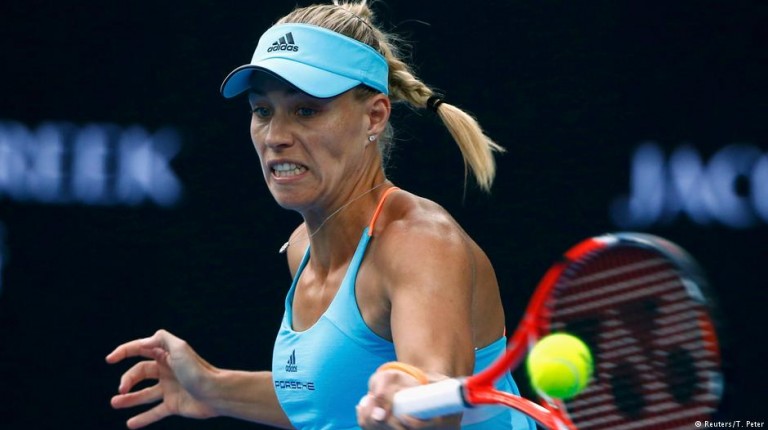 Germany’s Angelique Kerber has gotten off to a successful start as the No. 1 women’s player seeks to defend her Australian Open title. The men’s No. 1, Andy Murray, also prevailed over his first-round opponent.Angelique Kerber has defeated the 51st-ranked Lesia Tsurenko, 6-2, 5-7, 6-2 to advance to the second round of the first Grand Slam of the season.

Throughout the first set and much of the second, the German looked to be on cruise control, but it quickly turned into a battle that would to through three sets and take more than two hours to complete.

Kerber’s problems seemed to start after she went up 4-2 in the second set. Shortly afterwards she failed to convert a match ball and the battle was on. Tsurenko won the hour-long second set in which the previously confident Kerber looked somewhat rattled, putting a number of first serves into the net.

Tzurenko kept up the pressure into the third set, winning the first game, before Kerber seemed to recover her composure to take the match and advance to the second round, where she is to face fellow German Carina Witthöft, who beat Japan’s Eri Hozumi 7-5, 7-6 (6).

One could not help but be reminded of Kerber’s first-round match in last year’s Australian Open, when she had to fight off a match ball from opponent Misaki Doi of Japan, before going on to win the tournament.

However, getting through to the next round was the main thing she said, before adding that “first-round matches are always tough.”

Kerber’s Australian Open title was the first Grand Slam win of her career and it set up a 2016 that saw her eventually unseat the former women’s No.1, Serena Williams.

Men’s No. 1 also through

On the men’s side, Britain’s Andy Murray won his first Grand Slam match with the elevated status of having a knighthood and the No. 1 ranking, beating Illya Marchenko 7-5, 7-6 (5), 6-2. Murray has lost four of the last six finals in Melbourne, the last two to six-time champion and former No. 1, Novak Djokovic.

Australian Open 2017: Pressure on for new number ones Murray and Kerber

Andy Murray promises more as he basks in Wimbledon glory