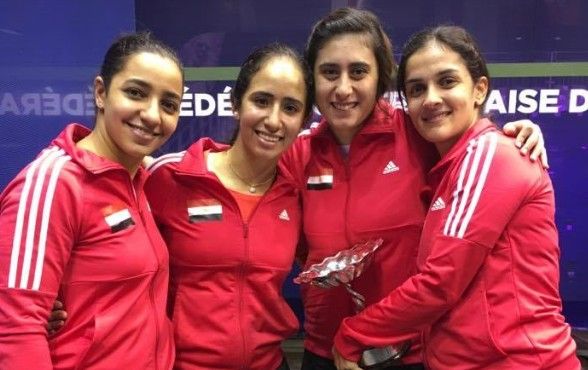 The four Egyptian champions were the ones who represented Egypt at the 2016 Women’s World Team Squash Championships celebrated in December. They made Egypt proud by winning the championship.

In the second round of the tournament, El-Sherbini, ranked first internationally, was the reason her compatriot Salma Hany Ibrahim exited the tournament after defeating her by 3-1.

Egypt’s Nour El-Tayeb also exited the tournament in the second round, after losing to her compatriot Gohar.

Commenting on her victory, Abdel Kawy said: “Vicky is a great player. She beat me last time in the British Open 2015, and it was on my mind. I wanted to get my revenge.”

El-Welily played against India’s Dipika Pallikal Karthik. The first game between both was on fire as it ended in 17-15 in El-Welily’s favour. The three remaining sets were calmer and ended by 11-8, 11-6, and 11-8, respectively, for El-Welily.

At the quarterfinals, which are taking place on 17 January, El-Sherbiny will play against Malaysia’s Nicol David; Gohar against France’s Camille Serme; Abdel Kawy against England’s Laura Massaro; and El-Welily against England’s Sarah-Jane Perry, who created the upset of the tournament so far as she beat home favourite Amanda Sobhy – runner up of the 2016 J.P. Morgan – in 67m and 5 games – the longest match ever recorded for the American!

El-Welily was the champion of the 2015 J.P. Morgan. In this regard Perry said: “I’m going to give it my all tomorrow and we’ll see what happens”. Perry seems ambitious as she added: “I’m excited to play against Nour here.”

As for Abdel Kawy’s matchup against Massaro, she said: “Laura is a great player. She beat me the last, well, how many times! I’ll keep it in mind, focus on my game plan, and try and reverse the result tomorrow.”